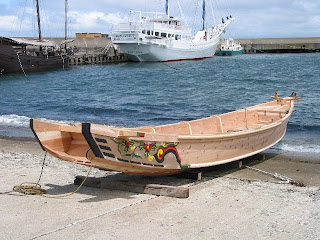 Douglas Brooks is an America boatbuilder and scholar of boatbuilding, specializing in traditional Japanese small craft. He has apprenticed himself several times to Japanese builders to learn techniques associated with various types, such as the shimaihagi in the foreground of the photo above, and the tub boat, or taraibune, below.

He does lovely work, and a visit to his website is most worthwhile, both for the lovely pictures of these fascinating boat types and for his descriptions of his building experiences. (He also maintains the site in Japanese, here.) He builds boats for museum exhibits, and is the author of The Tub Boats of Sado Island; A Japanese Craftsman's Methods, which is also available through his website. An article by Douglas on tub boats is available on the Amateur Boat Building site. 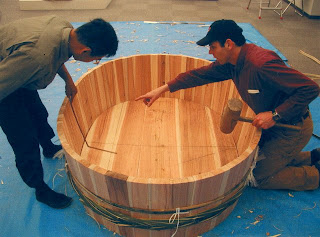 Both photos courtesy Douglas Brooks
Posted by Bob Holtzman at 2:04 PM No comments:

I had the opportunity to meet Lance Lee twice this month, and to see the Indonesian fishing boat Lansing Madura, the building of which came about as an offshoot of Lance's Tremolino! project. Lance had the boat on display at the Maine Boats Homes & Harbors show in Rockland, Maine, and at a lecture at the new Sail, Power & Steam Museum, which is busy a-birthing, also in Rockland.
Lance has been at the forefront of the movement to merge boats with experiential education for decades. The founder the The Apprenticeshop and Atlantic Challenge, he is now involved in something he calls "The Tremolino! Project." This is actually a related series of projects that Lance chooses not to turn into a formal organization. Drawing inspiration from educator Kurt Hahn and author Joseph Conrad, Lance uses boatbuilding and seamanship as vehicles to teach self-reliance and internationalism, and to crusade against youth's propensity to prefer virtual reality over the real stuff.

Lansing Madura is a Java Sea fishing gole'an. She was built in Indonesia over the course of about six weeks by one of the few remaining native builders of this type of craft and members of his community, assisted and inspired by one of Lance's proteges, Brian McClellan, also associated with Atlantic Challenge. The boat was built entirely with hand tools, with the objective of helping to revive the use of traditional boats to rebuild the local fishing fleets.

She is built entirely of teak in a shell construction method -- i.e., from the outside in. Virtually no metal fastenings were used -- she is pegged together. The most modern technology involved in her construction was the use of a come-along to pull the plank edges tight against each other. She uses a crab-claw rig with a good sized mainmast and a very small foremast -- I suppose you might call her a crab claw schooner?
Posted by Bob Holtzman at 10:32 AM 3 comments: 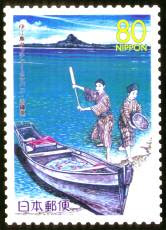 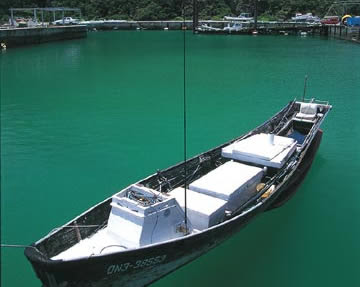 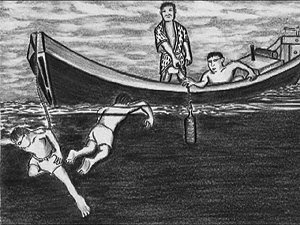 
Posted by Bob Holtzman at 3:17 PM No comments:

Too Late to Document Dhows? 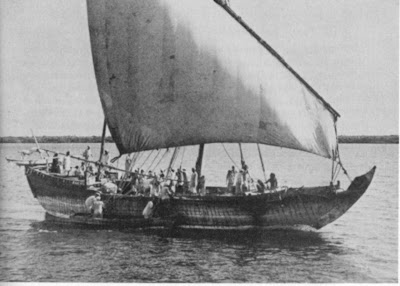 The term "dhow" is a generic one, used mainly by Westerners to refer to just about any type of Arab or Indian Ocean vessel. In the past, it was assumed the boat was fitted with a lateen sail, but now, even power-driven Arab boats are termed dhows. But according to Alan Villiers in his 1940 book Sons of Sinbad: The Great Tradition of Arab Seamanship in the Indian Ocean, the Arabs used the term very rarely, referring instead to a number of more specific types. In the appendix, Villiers describes a couple of types thus:

Baggala. The baggala is the traditional deep-sea dhow of the Persian Gulf and the Gulf of Oman. Its distinguishing features are the five-windowed stern, which is often elaborately carved in the manner of an ancient Portuguese caravel. Baggalas have quarter-galleries, and their curved stems are surmounted by a horned figurehead. Baggalas are built now only at the pot of Sur, in Oman, and are practically extinct in Kuwait. There are probably less than fifty in existence.
Bedeni. The common craft of the smaller ports of the Oman and Mahra coasts. Their distinguishing features are their straight lines, their flat, sheerless hulls, their upright masts, and the curious ancient method of steering by means of an intricate system of ropes and beams. The sternpost is carried up very high, and when anchored, or in port, the rudder is usually partly unshipped and secured to either quarter. Bedeni are usually small craft and often have one mast only, though two-masters are common in the trade to East Africa.

And so on, through eight more descriptions of the following types:
Belem
Betil
Boom
Jalboot
Mashua
Sambuk
Shewe
Zarook

This is only partially enlightening, and one wishes for more systematic descriptions, to say nothing of lines drawings, sail plan profiles and other graphic representations. But Villiers' objective in Sons of Sinbad was to describe the life aboard the trading dhows (and more briefly, on boats engaged in the pearl fishery), and at that goal he succeeded admirably, providing a sensitive, culturally astute, and thought-provoking view of the Arab seafaring subculture just before the sailing trade died with the Second World War. (Particularly interesting is how many of the Arab criticisms of the West haven't changed in all these years.)

So while one cannot criticize Villiers for the lack of detail about the vessels he observed or sailed upon, one can still regret there isn't more. It's unfortunate that no one documented these fascinating vessels before so many of them disappeared, in the manner of an Edwin Tappan Adney or a Haddon & Hornell (for American bark canoes, and canoes of Oceania, respectively). Villiers himself regretted that that wasn't his goal, and also that the Arabs were themselves not sufficiently interested in their boats as cultural objects to bother recording them, much less preserving examples for posterity.

By the way, Villier's book appears in other editions with a (much) longer subtitle: An Account of Sailing with the Arabs in their Dhows, in the Red Sea, Around the Coasts of Arabia, and to Zanzibar and Tanganyika: Pearling in the Persian Gulf: And the Life of the Shipmasters, The Mariners and Merchants of Kuwait.

The photo of a large sambuk is from Villiers' book Sons of Sinbad. This was a much smaller vessel than the boom on which he sailed from Kuwait to Zanzibar and back again, but was typical of the pearling boats he observed in the Persian Gulf. 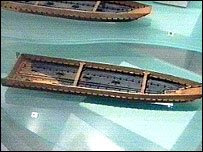 A few months ago I described the Dover Bronze Age Boat here. Discovered in 1992, it is the most elaborate boat of its age (1500 BC) yet to be discovered in Europe. Sitting at the cusp between dugout technology and planked construction, the vessel was constructed of four lengthwise sections of oak logs, elaborately hollowed to fit together in the shape of a boat and then lashed together with small split branches (withies) of yew. Terrible technology, since there was little structure to prevent the log sections from working against one another, but really impressive woodworking and clearly on the right road toward the right technology.


Now some of the same archaeologists who have been involved with the boat since its discovery have a new project to build a full-size (10 meter) replica and test it on a voyage from Folkestone, England, to Wissant, France in 2010. Read the full article in on the Stone Pages website, here.

It is assumed that the original boat was paddled, not rowed or sailed. (The boat probably had one more set of strakes above those recovered in the excavation, and it is possible that evidence for some provisions for rowing might have been lost, but lacking those upper strakes, and lacking any evidence for the use of oars in England at the time, the use of paddles must be assumed.) The replica, therefore, will be crewed by volunteers from the British Dragon Boat Association, who have some experience paddling large open craft -- although to the best of my knowledge, dragon boat racing is always done in protected waters and not on anything as boisterous as the English Channel. Should be interesting.

Photo of reconstruction model from the BBC. Painting from http://www.dover-kent.co.uk/
Posted by Bob Holtzman at 4:52 PM 1 comment:

A Couple of Proa Blogs

A couple of good sources for information on proas -- i.e., single-outrigger multihulls:

Both have lots of info. on both modern and traditional proas and occasionally on other types of multihulls. I know Gary Dierking and edited his book, and think it's very good.

Posted by Bob Holtzman at 6:04 AM No comments: