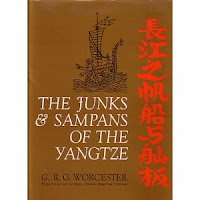 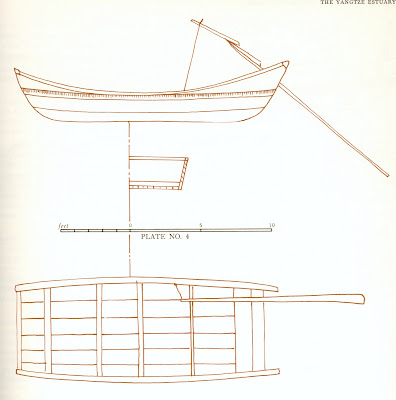 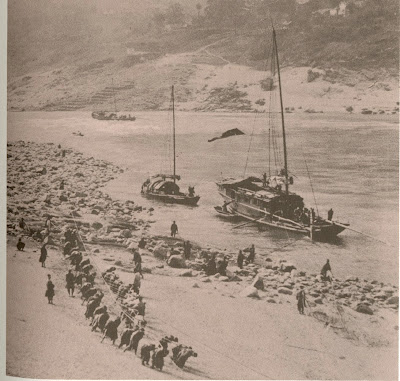 The two vessels in the middleground have evidently already been hauled past the rapids. Perhaps their men are resting after the effort, but it was not uncommon for a junk to be hauled all day, for days at a stretch, if conditions required.
Riverside communities maintained towpaths, either voluntarily to promote their commerce, or by regulation. In some gorges, paths were entirely cut into the living face of the rock. Photos of these rock-face paths look precarious, and no doubt some individuals, and perhaps occasionally entire tracking crews, drowned due to a simple mistep, or to being overpowered by the current against the boat they were hauling.
It's interesting to compare this all to the barge traffic of Olde England, where a barge's crew was typically limited to a small family, where the towing was invariably done by horse, and where locks, not manpower, served to overcome rapid changes in the river's elevation.
Posted by Bob Holtzman at 4:50 PM 3 comments:

In a comment on a recent post, reader Swarup Bhattacharyya drew my attention to his own blog on the boats of Bengal. Take a look.

The variety of watercraft in the region Swarup covers is impressive. Lots of different construction methods and boat types. Thanks Swarup!
Posted by Bob Holtzman at 5:34 PM 1 comment:

Email ThisBlogThis!Share to TwitterShare to FacebookShare to Pinterest
Labels: India

Another Take on the Stitch-and-Glue Dugout

Chesapeake Light Craft, one of the largest suppliers of boat kits for "stitch and glue" (a.k.a., taped seam, tack-and-tape, etc.) construction, has posted info. on a great new product.

I only hope this will still be here after April 1.

By the way, "einbaum" is German for dugout canoe, literally "one tree."

Thanks to buddy Jean Paul Vellotti for this one.