Although founded in the early 20th century, the L.C. Bates Museum, in Hinckley, Maine, is a throwback to an even earlier time, when many museums were more or less random collections of oddities. Here you will find biological specimens, works of art, and anthropological artifacts side by side, many of them labeled poorly or not at all and too many deteriorating from a lack of care due, apparently, to a paucity of funds.

Nevertheless, it's a fun place to browse on a short visit, it's cheap ($3 for adults), it's on the way to good canoeing and rafting in northern Maine, and it contains a couple exhibits of interest to us. One is about Native American (primarily Maine) birchbark technology; the other displays Greenland Inuit artifacts from the first decade of the 20th century. 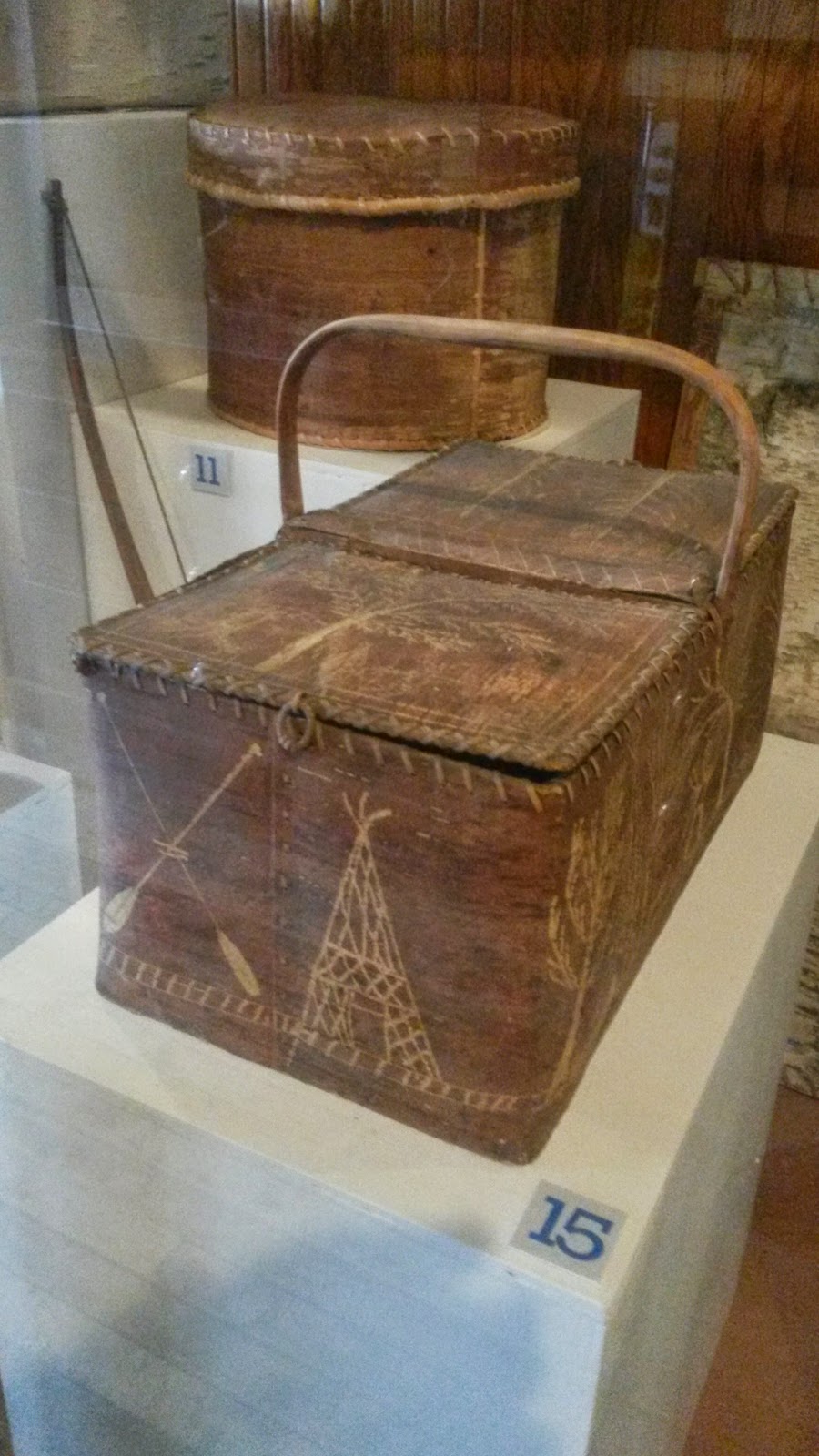 Perspective view of the same box, with a round covered box, also of birch bark, behind.

Posted by Bob Holtzman at 12:30 AM No comments:

Yesterday I received training in first aid and CPR at Three Rivers Whitewater in The Forks, Maine. (The town is named for the confluence of the Kennebec and Dead rivers.) This whitewater raft trip outfitter runs The Boatman's Bar & Grill, the interior of which is decorated with several interesting boats, prime among them a 20th century dugout canoe from Nicaragua.

The boats are displayed on walls and ceiling. I've rotated the photos for the most logical view of the boats, but the context may appear confusing for that reason.

The Maya, whose civilization was based in the southern Mexico (including the densely forested Yucatan Peninsula) and parts of Central America depended heavily upon waterborne transport to supply goods to their several urban centers. Within Mayan territory, goods traveled by river from the interior to coastal areas, and from the coast inland as well. Coastwise trade also occurred both among Maya and with neighboring peoples.

Christopher Columbus encountered the Maya in the Yucatan on his fourth voyage to the New World. His son Ferdinand wrote:

"...there arrived at that time a canoe long as a galley and eight feet [2.5m] wide, made of a single tree trunk like the other Indian canoes; it was freighted with merchandise from the western regions around New Spain. Amidships it had a palm-leaf awning like that which the Venetian gondolas carry; this gave complete protection against the rain and waves. Under this awning were the children and women and all the baggage and merchandise. There were twenty-five paddlers...."

The cargo in this single canoe included clothing, tools, weapons, foodstuffs, wine and luxury items. Obsidian was also an important import. The reported width of 8 feet seems unlikely for a logboat.


Although no Mayan boats have been recovered, there is ample evidence that dugout canoes were the standard means of transportation. Aside from the matter of size -- we can safely assume that river craft were smaller than seagoing boats -- Maya canoes took several forms. Incised illustrations appearing on bones found in a royal burial in Tikal depict some of these variants. Mayan illustration showed most objects in profile, which limits our understanding of the canoe designs to that view, but shows some clear differences in sheerline, end decoration, and in the forms of the stem and stern.

So important was coastwise trade that the Maya established aids to navigation. Marks were erected on trees, and even the massive citadel of Tulum appears to have served at least in part as a lighthouse.
Sources

Posted by Bob Holtzman at 12:14 PM No comments: