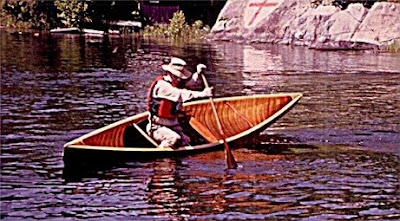 Posted by Bob Holtzman at 5:14 PM No comments:

According to an article in the Peterborough Examiner, Jeremy Ward, the new curator of the Canadian Canoe Museum, in Peterborough, ON, is taking steps to involve the museum more closely with the local community.

The article tells of a project that Ward managed for the museum, the "construction of a 36-inch birchbark canoe in 2004." On first reading this, I thought that the reporter or editor had misread the foot (') mark and interpreted it as inches (") -- shades of the funniest scene in the movie "This is Spinal Tap!" But on further reading, it turned out to be accurate -- there is a current exhibit of miniature canoes that Ward managed.

I've never had a chance to visit, but the CCM is at the top of my list of places to go -- up there with India and northern Scotland. They don't have a terribly impressive website, but the scope of their collection of canoes from around the world is renowned. Maybe in gratitude for this tremendously valuable exposure, Mr. Ward will sponsor an all-expenses-paid trip for me and my family. You suppose?
Posted by Bob Holtzman at 12:55 PM No comments:

Another boat from Ships of China by Valentin A. Sokoloff, cited in my previous post:
Life boats were stationed at dangerous rapids & it is recorded that in 1899 they were instrumental in saving 1473 lives from wrecked junks. Salvaging of cargo was expressly forbidden. The boat shown is about 20 feet long & 7 feet wide. In 1901 there were 44 of these boats. Later larger boats were introduced. Inscription on stern flag reads: "The Society for Rescuing Drowning People, Lower Section, Lungmenhao, South Bank, Chungking."
It's intriguing to picture this boat in use in was must have been (given the numbers of rescues performed) really dangerous whitewater, with men standing, facing forward, at the two rowing oars, and another at the enormous steering oar. I presume the steeing oar had a propulsive function as well.
Posted by Bob Holtzman at 9:31 AM 1 comment: