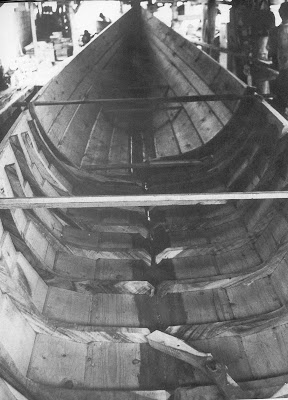 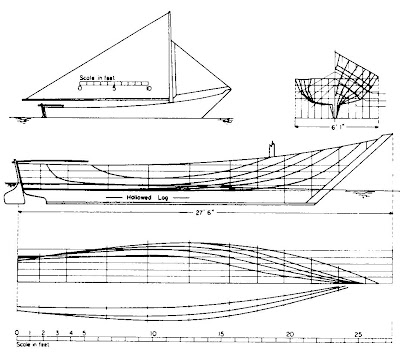 Although Pyle took the lines himself, and they are presumably accurate, these were from an outboard-powered boat, while the strangely low and long sailplan was based on a sketch from a native informant and seems less reliable. No sailing pirogues were in existence in 1975, engines having completely taken over.
Posted by Bob Holtzman at 7:04 AM 2 comments:

Still further south from the gommiers of Dominica and Martinique and the canot of St. Lucia is another expanded and extended dugout, the sailing canoe of Granada. When Douglas C. Pyle visited the island in 1975, "a handful" were still in use. It would be a surprise, though a pleasant one, if any still exist 35 years later. 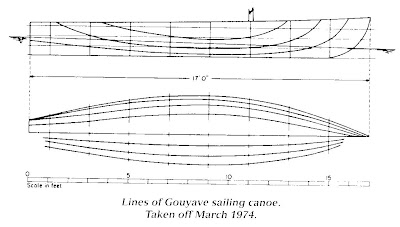 The lines show very clearly that no effort was made to give the hull any shape other than that assumed by a hollowed log wedged slightly open at midsection. They were propelled by sailing and rowing simultaneously, a practical mix in the flat water and fluky breezes that prevail in the lee of all high islands such as Granada.

In spite of Pyle's criticism of their unsophisticated lines, he says the canoes were "versatile...capable also of operating in the open sea," and he describes a regatta in nearby Carriacou where the boats seemed to perform adequately, though hampered by their blue denim sails.

In any case, I find the buttocks, waterlines, and sheer profile pleasing. The sections, however, are another matter. Where the bottom of the canot was just slightly flattened, and the gommier almost perfectly round amidships, the Granada canoe's bottom is nearly a rounded V. Lightly laden, this boat would have little initial stability, though I think she would firm up when heeled down onto her wide flared sides.
Posted by Bob Holtzman at 1:54 AM No comments:

The Canot of St. Lucia

An interesting contrast to the gommiers of Dominica and Martinique is the closely-related canot of St. Lucia -- the next large island south in the chain of the Windward Islands. In Clean, Sweet Wind: Sailing with the Last Boatmakers of the Caribbean

, Douglas C. Pyle writes of his first encounter with this boat while aboard a modern Western-style sailboat:


We were nearing midchannel when something in the animated monotony of the waves caught my attention -- a flash that was not a whitecap, a motion not part of the heaving sea. A few minutes later, there was another visual disturbance, this time from a different quarter altogether. As the disturbances became more frequent, they also drew closer, slowly revealing themselves as human figures clad in yellow oilskins and topped by straw hats with fantastic high peaks. The figures seems (sic) to skim the surface of the water at high speed, darting this way and that like disembodied spirits.

When the full reality was finally disclosed, the figures were seated by threes, one behind another in a canoe so narrow and so low in the water as to be invisible at a very short distance. The figure in the stern was steering with the outboard motor; the one in the middle was bailing. In the bow, lifted completely clear of the water by the thrust of the motor, the third figure peered forward and gestured from time to time, sending the whole rig swerving this way and that.

﻿
﻿
Like the gommier, the canot is primarily a fishing boat that, at the time of the Pyle's observation, was well in the process of conversion from sail to outboard power. The basics of the two types are certainly similar: an expanded and extended dugout with a single strake added to increase freeboard. But as Pyle notes, the canot is "easily distinguishable from the gommier by the striking extension of the dugout forward into a sort of cutwater." Some of the examples of gommiers in the previous post showed a small extension, but nothing like the imposing "ram bow" of the canot.

As Pyle also notes, the canot's midsection is quite a bit flatter, with a slack, but perceptible bilge, as opposed to the almost perfectly round sections of the gommier. In addition, he notes the length-to-beam ratio is much longer in the canot; and "there is less freeboard in the bow, and the waterlines show less hollow and are less streamlined."

In the late 1990s, the Gli Gli Project built a big (35') Carib canoe with the intention of sailing it from its home in Dominica to South America. The project's rather sketchy website doesn't tell the complete story, though, and it may be that the voyage was not completed. It's not clear from the photos on the site if the canoe was more like the gommiers of Dominica or the canots of St. Lucia.
Posted by Bob Holtzman at 10:06 AM 2 comments:

Gommiers of the Windward Islands

The Windward Islands -- i.e., the southeastern string of islands in the Lesser Antilles -- were populated by the Carib Indians when discovered by Europeans. Although subject to oppression and attempts at extermination by Europeans, pure Caribs communities and culture lasted longer than many other native New World cultures, due, it is said, to their ferocious resistance to European incursion, which resistance lasted several decades into the 18th century. Communities of Caribs, mixed with other races (predominantly Blacks) but still recognizably distinct, are still in existence on several islands, and a reservation of relatively pure Caribs still exists on Dominica.

The dugout canoe was the indigenous boat of the Caribs, and like the people themselves, it remained in existence well into the modern era, modified, but still recognizable. While the pre-Contact versions were "pure" dugouts -- i.e., possibly expanded, but not extended -- their more modern derivatives are all extended with the addition of strakes above the dugout base.
Most of what follows is from Clean, Sweet Wind

, by Douglas C. Pyle (International Marine, 1998).
Gommiers were still in use in Dominica, the northernmost of the Windward Islands, in 1975. Their construction was fairly typical of dugouts around the world. The hull was hewn from a tree called gommier in several of the French-speaking islands. After the tree was felled, it was flattened on one side, and that side turned topmost. Coals were placed on the flat surface, then the charred area was scraped away -- originally with stone and shell tools, more recently with iron and steel. The process was repeated until a sizable amount of wood was removed, then inspection holes were bored in the bottom, along the centerline, and wood removal continued until the bottom was 3" thick and the sides 1". The bow was cut sharply vertical, and in the modern version, at least, the stern was cut square . After the holes were plugged, the hull was filled with water, into which were placed fire-heated stones. When the wood had softened, the sides were forced outward in stages with temporary thwarts of steadily increasing length. Wash-strakes were edge-nailed to the top of the dugout hull and a few frames added.
﻿﻿ ﻿﻿
The gommier tree was still common on Dominica in 1998, but it was scarce on Martinique, and some Dominican builders would tow unfinished log hulls to Martinique for sale. As of 1972, there were more than 2,000 of them registered in Martinique, mainly used for fishing, but the movement was already well under way to replace them with yoles -- very similar in form, but plank-built and hence easier to obtain and more economical.
﻿﻿
﻿ ﻿ ﻿﻿
﻿ ﻿ ﻿
﻿﻿ ﻿﻿
﻿﻿
﻿ ﻿  ﻿
﻿ ﻿ ﻿

Friend John Meader spent a couple days in Hong Kong recently and kindly allowed me to use these photos of the sampans he observed in the harbor.  All photos may be clicked for an enlarged view. 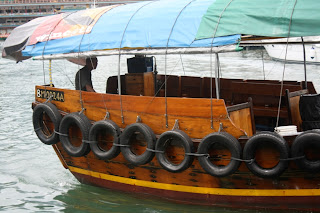 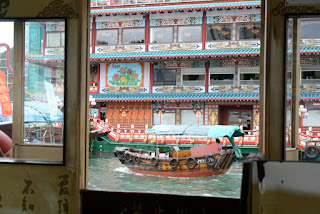 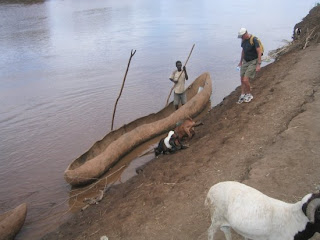 Just had to share this photo I stumbled upon of an extraordinary double-curved dugout from the village of Omorate, in the Omo River Valley in Ethiopia. Not much detail about it, but read what you will in this blog where I found it. (Thanks to the source bloggers, Ray and Gary.)

I can't imagine that one would prefer to build a boat shaped like this, and it's almost equally hard to believe that it warped like this after it was put into use. The only remaining explanation is that no straight trees were available to the builder, who had to settle for this curvy one. It must be awfully hard to maneuver, but its owner gets bragging rights to "Most Distinctive" in the Indigenous Boats Beauty Contest.
Posted by Bob Holtzman at 7:30 PM 3 comments: