Recent trip with family to Canadian Canoe Museum in Peterborough, Ontario, was wonderful. First photo is Max and Cate flanking museum founder and canoe luminary Kirk Wipper, who showed us through and was a wonderful host. Next photo is the "figurehead" of an extraordinarily decorated 50-foot-long dugout from Irian Jaya, Indonesia (in the storage area -- not on display to general public). Follow the link to my Picasa album at the bottom for many more canoe and kayak photos. 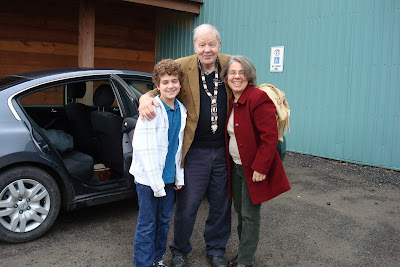 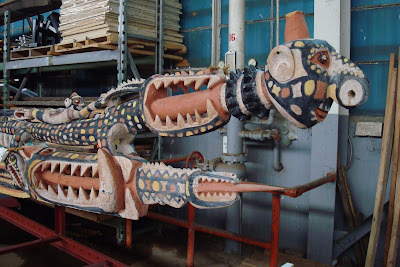 Posted by Bob Holtzman at 9:44 AM No comments:

Visited the Canadian Canoe Museum in Peterborough, Ontario, today, in company with wife, son, and the museum's founder, the renowned Kirk Wipper. While there, we were shown into the new, 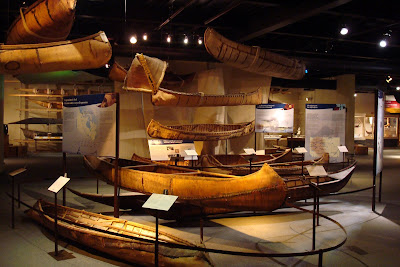 immense storage areas by general manager John Summers. About 500 canoes in storage! A real privilege and an awe-inspiring experience. I'll post in more detail later, but just wanted to post a photo or two and report my immense good fortune. Anyone who has the opportunity to see this special museum should do so -- Peterborough is about 1.5 hours outside of Toronto. 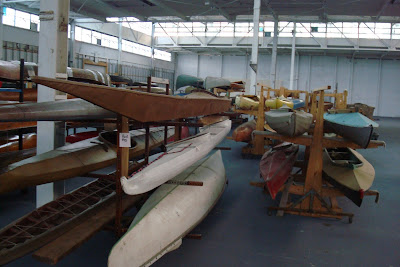 Just wanted to highlight a few nice paintings I came across recently. No lessons or points to make -- just interesting or lovely images to look at.

First is this pretty, idealized Sinhalese outrigger, from Bjorn Landstrom's THE QUEST FOR INDIA

. (I've cited Landstrom's wonderful boat paintings previously, here.) The artist's choice of a very low perspective does a nice job emphasizing the main hull's slenderness and rocker, and the shadows and reflections on the wet sand are so nicely rendered. 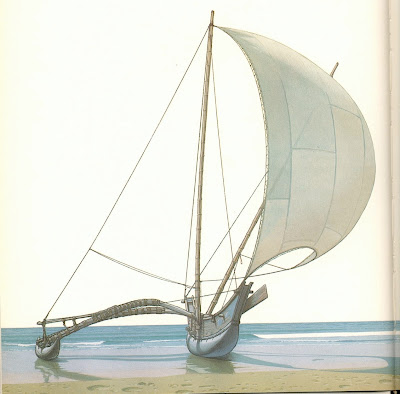 Next, from the same book, is a fleet of Chinese oceangoing ships like those on which Marco Polo took the first stage of his voyage home from China some time before the year 1295. The design of the tumblehome is fascinating. 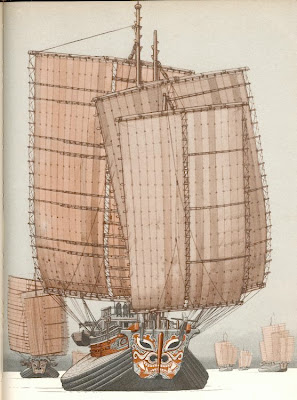 Finally, Egyptian boats from an album of images by Victorian artist and traveler Edward Lear. The images in the album are available as prints from the National Maritime Museum, Greenwich, England. Thanks to Heather Hernandez of the Maritime Compass blog for pointing out this fine resource. 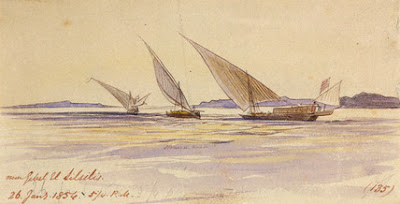 Posted by Bob Holtzman at 12:15 PM No comments:

Modern lapstrake (clinker) builders set up building forms (or station molds) up on a strongback or backbone, then line off appealing plank shapes, spile the shapes, and then cut the planks to fit properly on the form. This presupposed the existence of carefully drawn plans that can be scaled up to full size, and/or accurate tables of offsets. The traditional clinker builder, in both the Western and non-western traditions, had no such plans or tables -- nothing upon which to base station molds. It was the plank shape that came first, and the boat took shape as those planks were assembled. While most builders relied on memory to copy the plank shapes of their teachers, it must have taken an extraordinary mind to modify the shape of a hull for any reason, for this would require visualizing the shapes of the planks needed to form the hull. Even as simple a boat as a banks dory has very surprisingly-shaped strakes, if you see them "unwrapped" from the hull, and the notion that builders could properly visualize the plank shapes needed for, say, a round-bottomed hull of wide beam, with a hollow entry, spoon-shaped bow, and a tucked-up transom stern -- well, just try and do that without CAD.

But do it they did. Shown below are a couple examples. The first, at the National Maritime Museum (Greenwich, England), was a demonstration to show how it was done without forms. The builder did use a few half-molds, but these were simply held in place by hand, temporarily, to check how the hull was developing. Planks were not bent around them. 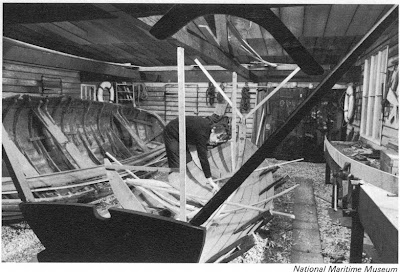 The next example is a Bengladeshi boat, similar to the hull shown in yesterday's post. Note the copious use of clamps and shores to hold strakes in place while they're fastened. 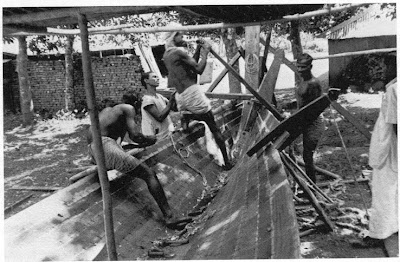 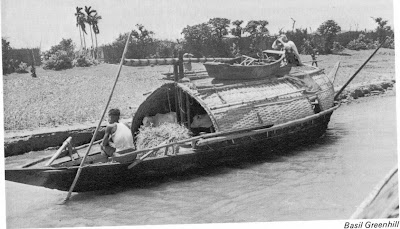 Finally, we see a variety of planking styles used to extend (raise) the sides of a dugout canoe. These same planking methods continued to be used after the dugout base had atrophied into a keel. All are examples of what Greenhill described as "edge-joined" planking and, whether lapped or smooth, were methods used to build shell-built hulls. 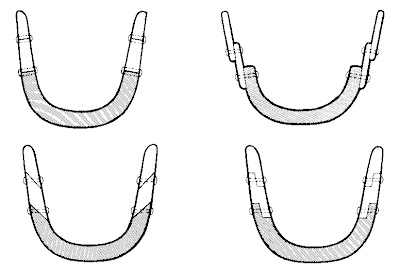 (All images in this post are from Archaeology of the Boat, by Basil Greenhill.)

Planking: it's more than just carvel vs. clinker

It's been over a month since my last substantive post, and I must apologize to my reader/s for the blackout. No problems other than being busy, but who isn't?

In September, I discussed Basil Greenhill's "four roots of boatbuilding" as described in his Archaeology of the Boat. Another important theme of this book is the typology of boats based on their planking styles. In the Western tradition, we're accustomed to thinking of everything in terms of smooth-skinned versus overlapping planks -- also known as carvel versus lapstrake (a.k.a. clinker). But looking at boatbuilding from a broader cultural perspective, this is not a very useful distinction.

Modern builders of traditional western boat types do much of the setup the same way, regardless of whether they're building carvel or lapstrake: first you set up building forms or sawn frames; then you bend planks around the forms or frames. Then if you were using forms, you replace them with frames. But this wasn't always the case. The lapstrake tradition is by far the older one in western culture and, in contrast to modern methods, building forms and sawn frames were not used. This is because builders did not work from plans, and did not envision the boat as a series of sections or half-breadths.

Rather, they viewed the boat as a shell. Plank shapes were the starting point, and through experience, ancient builders could envision how a collection or series of plank shapes would go together to create a boat of a given shape. The planks were, in Greenhill's terminology, "edge-joined" to one another to create the shell or envelope, and only then was an internal structure inserted.

But beware the term "edge-joined" in the paragraph above. These were lapstrake boats, and the planks were not set "edge to edge" carvel-style. The edges did in fact overlap, lapstrake-style. By "edge joined," Greenhill means that the planks are structurally connected to one another to create the shape of the hull. This, then, is a clear contrast to carvel planking, in which the planks are not attached to each other at all but, rather, are attached to the frames for structural integrity.

So Greenhill largely divides plank-built boats into edge-joined, i.e., "shell-built" hulls, and non-edge-joined, i.e., skeleton-built hulls. This proves to be a far more useful way of looking at boats archaeologically and cross-culturally, because many cultures use (or used) edge-joined planking methods that result in a smooth outer skin. This involves the use of a variety of overlapping methods, one of which is shown below in images from Greenhill's book. 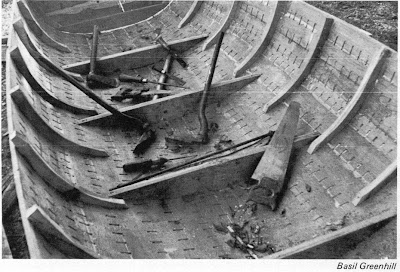 The images show a common planking method of Bengladesh. Note the full-length rabbet between the planks, which are joined by iron staples set into mortises on both sides. After the entire shell is thus assembled, frames are added to the inside. As shown in the photo, frames across the bottom (i.e., floors) often do not even touch frame members up the sides. The shell provides the majority of its own structural integrity, and the frames are reinforcements, but not essential structure as in a carvel hull's skeleton.

Greenhill diagrams about two dozen shell-forming methods (unfortunately, the book's graphic doesn't scan well for the web), with a great variety of plank-joint styles (e.g., rabbeted/smooth- skinned, normal lapstrake; reverse-lapstrake [in which the lower plank's upper edge is outside of the upper plank's lower edge]; strip-planking, bevelled/smooth-skinned, flat, flush smooth skinned, and more) and fastening methods (e.g., mortised staples, sewing or stitching, edge-nailing or dowelling, etc.). It's clear that the majority of plank-built boats in what I refer to as indigenous traditions rely on edge-joining/shell-built technology.

Viewing all plank-built boats from this perspective opens up one's understanding of boatbuilding far beyond the carvel-vs.-clinker duology. One can therefore see the Chesapeake Bay log canoe (western culture, yes, but outside the norms of the western boatbuilding tradition) in a new light: although the topsides planks conventionally meet the boat's stem and stern, the bottom planks run parallel to each other, their ends curving up to meet the bottom edge of the lowest topsides plank rather than curving inward toward stem or sternpost. The evolution of this type makes sense: originally it was truly a log canoe. It was expanded laterally by adding additional logs; the logs were hollowed out and, over stages, became not hollowed logs but planks -- but they were still joined edge-to-edge to make the shell. Eventually, topsides strakes were added in what has now become the traditional carvel style.
Posted by Bob Holtzman at 4:03 PM 2 comments: