In this post we look at the remainder of Buckminster Fuller's model boat collection that was recently donated to Penobscot Marine Museum. See our previous post for the first half of the collection.

Buckminster Fuller is normally associated with technological modernism, but it seems he had a penchant for preindustrial technology too. His granddaughter recently donated Fuller's collection of boat models to Penobscot Marine Museum, the bulk of it representing boats "outside the Western tradition," as we put it.

Collections Manager Cipperly Good kindly granted us access to the collection, which the museum received with almost no accompanying documentation. Being brand new to the museum, it has not yet been carefully studied, so most of the vessels represented have yet to be identified. Of the roughly 15 models in the collection, one is American (an early 20th century powerboat hull) and three are European (20th century Greek and Danish vessels). The rest represent preindustrial types: seven are from Asia, two from Oceania, one appears to be from Africa, and one is a mystery even at the continental level.

Most of the models appear to have been built for the tourist trade and, as such, may not be detailed or accurate enough to associate with real, specific vessel types. Some of them are fanciful, intended more as an artistic expression than an accurate representation.

Here we present our photos the non-Western types that are not from China. (We'll look at the Chinese models in our next post.) Our identifications of types and provenances are largely speculative. As we learn more, we'll update the captions. Please help us identify the models by writing to us in the Comments. As always, click any image to enlarge. 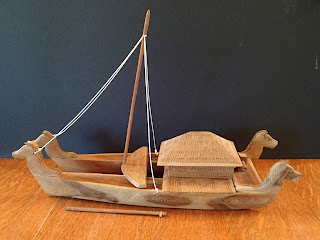 Double-hull voyaging canoe. An identification tag found inside the deckhouse (the roof lifts off in the manner of a trinket box) reads "Bora-Bora. Given to R.B.F - 1966 by native chief" (Richard was Fuller's first name.) The hulls are carved from solid, dense hardwood. The horsehead figureheads and all other features are glued on. The proper location of the spar on the table in the foreground is unknown. Many of the glued parts are coming loose but the model is otherwise in good condition. 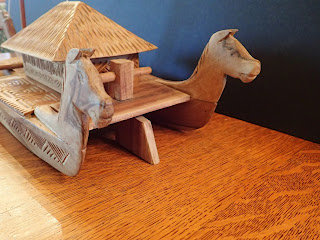 A rudder under the aft deck is steered by a massive rudder post with tillers extending from both sides. The tillers would be far too short to steer the real vessel. Horses, of course, were unknown in the Society Islands before European contact, and we doubt that they were ever used as figureheads in Bora Bora even after they were known. 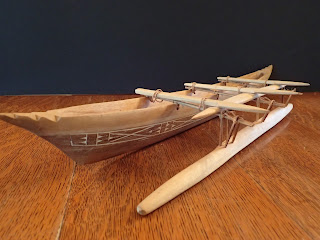 Samoan outrigger paddling canoe. ("Samoa" appears as part of the carved decoration on the starboard bow.) The hull is solid hardwood. The maker used the heartwood/sapwood division of his workpiece to advantage in creating a two-toned hull, with the lower half darker than the upper. Incised carving in the lower half was accentuated by rubbing in some light-colored material. 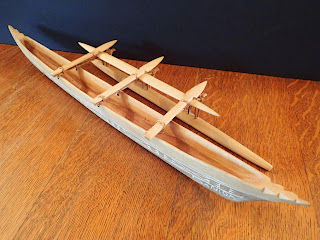 Although it was made for the tourist trade, the model strives toward accuracy in some details. The outrigger extends further forward than it does aft, beginning just short of the waterline at the cutwater, but ending just past the aft outrigger struts. The complex configuration of the struts appears to be accurate. Crudely carved paddles with pointed, leaf-shaped blades are lashed to the tops of all three outrigger booms. 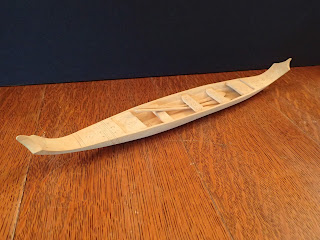 Canoe, probably Southeast Asia. The hull and the long bow and stern decks are carved from a single piece of lightweight wood, but the model may represent a dugout or a boat with stitched or metal-fastened planks. Deck extensions or seats located just inboard of and slightly lower than the decks were added separately, as were three sitting thwarts. All of these added pieces rest on a ridge carved on the hull's inner surface.


(This model) is an abstraction of sampans from Tonle Sap Lake in Cambodia or from that connected section of the Mekong river. These boats range in size from about 12 ft [4 m.] to about 25 ft [8m]. Each end is smoothly carved from one log piece with stepped insets for each level of planking of the main body. The keel connecting the two carved ends is also deeply shaped following the a curved cross section. The minimum number of planks each side of the keel is 3 with 1 washstrake plank increasing to 4 or 5 with 2 washstrake planks. Most planking is carvel on frames, decks are planked parallel to the gunwales. Washstrakes stop either short of both ends or one end only with the other end resolving to the carved ‘stems.’ Most examples seem to be more curvaceous in plan that the model, but the inset carving on the model does not seem to be present on the common examples that I’ve seen, however they are painted in varying colours: blue for the exterior, reds and oranges for the upper stem facets and the rest left uncoloured. Whatever the case, these sampans are supremely elegant.

We thank Mick for the input and agree with his identification. In fact, we blogged about the paddle-propelled boats of Tonle Sap here and here, and several of them are indeed clearly of the type that the model depicts. 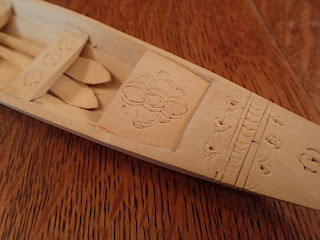 Most upper surfaces are decorated with incised carvings of geometric and floral designs. The two long-shafted paddles have bulbous end-grips and blunt leaf-shape blades. From the shape of the raised bow and stern and the style of the decorations, we believe this represents a Cambodian, Thai, or Vietnamese type. 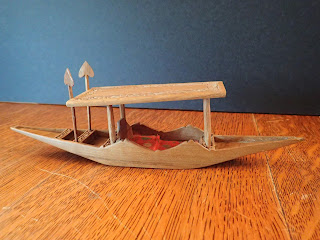 A small passenger vessel, possibly a water taxi. We believe to be from Southeast Asia. The hardwood hull seems to represent a plank-built hull with a flat central bottom part and fore and aft bottom pieces that rise from it at angles. The thwart-seats and coach roof are carved with a geometric, possibly floral, design. The low main passenger seat (for two?) and the "floor" in front of it are upholstered with fabric. A pair of paddles or oars with heart-shaped blades are held in sockets directly behind the house. Two empty sockets in the thwart aft of them may have held another set at one time. 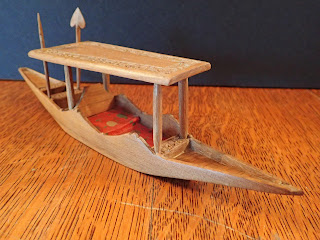 Our guess is that the vessel operators would have stood on the aft deck. The gunwales rise to two points adjacent to the cabin and are reminiscent of the arrangement of tholepins on a Thames skiff, but we believe this is a superficial similarity only. In a real vessel of this type, the coach roof would probably have been lighter in relation to the rest of the boat -- probably of matting or cloth. 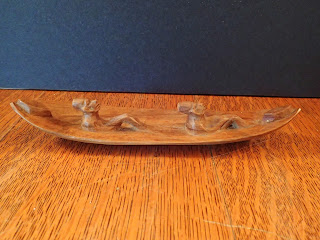 A dugout (?) canoe. The men appear to be wearing fezzes and have negroid features. We assume this model is African. Alternately, the boat's shallow shape is reminiscent of some bark canoes of Australian Aborigines, but then the "fezzes" would have to be interpreted as a hairstyle instead.

UPDATE: Mick Allen also identified this one as a carving from Kenya. He found a listing on Amazon of a nearly identical model here. It's so close that it appears to have been made by the same artist. Thanks again, Mick. 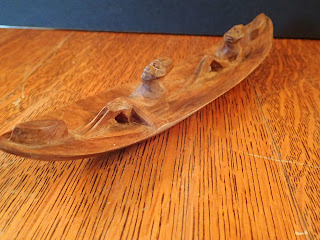 The model builder was not trying to achieve a literal depiction of a canoe and its passengers. The hull is extremely shallow and hollowed only slightly. Aside from their heads and faces, the passengers are represented mainly as flowing shapes that merge smoothly into the bottom of the boat; they have no hands, and their feet and arms are only vaguely suggested. A paddle is suggested in the form of a heavy shaft that extends to the left of the bow paddler, although it has no blade at its end and does not extend beyond the gunwale. Lozenge-shaped objects at the bow and stern may represent cargo. 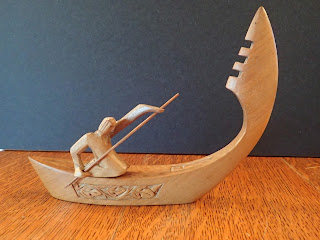 Boat propelled by a kneeling paddler. The blade of the long-shafted paddle is broken off. We have no guesses about the provenance of the model or the type of boat it refers to. 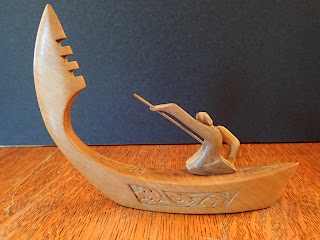 The exaggerated rise of the bow does not reflect any real boat's design and is the model maker's artistic vision in a piece that is intended only as a decorative item. The sides and top surface of the hull are decorated with vine-and-leaf carving. Although crudely formed, the human figure's posture does a nice job depicting the vigorous, muscular, yet graceful movement of paddling.