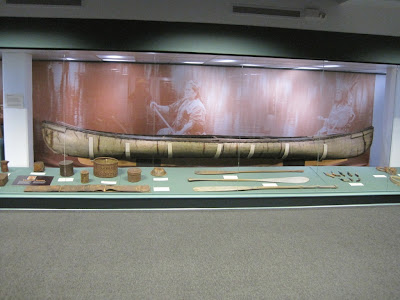 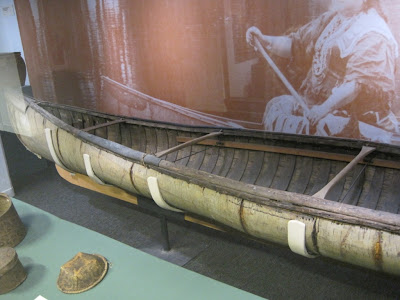 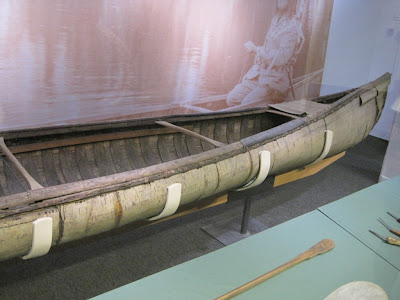 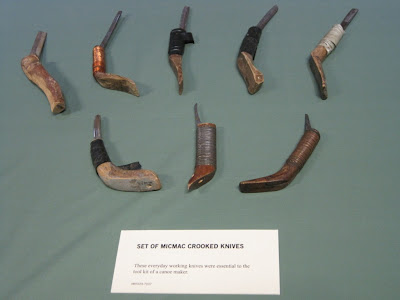 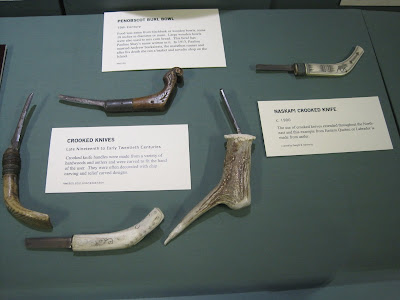 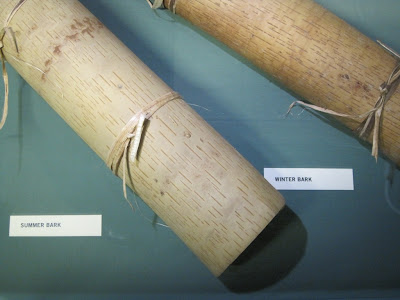 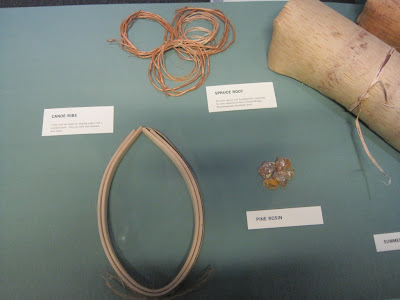 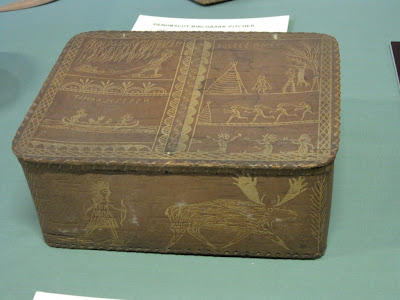 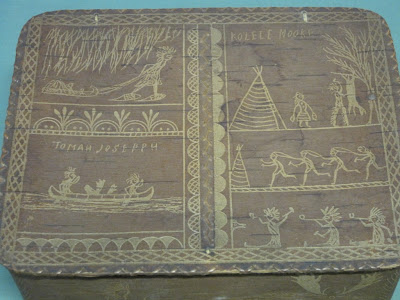 Posted by Bob Holtzman at 5:22 PM No comments: 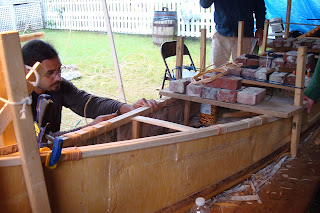 Last summer, bark canoe maestro Steve Cayard and a team of Native American craftsmen built an authentic Wabanaki-style bark canoe on the grounds of the Penobscot Marine Museum in Searsport, Maine. The building team consisted of a half-dozen Passamaquoddy, MicMac, and Penobscot Indians, and the project had two main objectives: to teach this culturally critical skill to the descendents of the people who developed it, and to demonstrate the process to the public at large. I blogged about the project a number of times (click the index link for "bark canoes"), and documented it in a series of more than 100 photos. The finished boat was launched in a brief ceremony at the 2009 Maine Boats, Homes & Harbors show in Rockland, and that was the only time the canoe has been in the water. It is still a brand new canoe.
Now, the Penobscot Marine Museum is auctioning the canoe, to raise funds to repeat the project in 2010. The objectives, again, are to teach canoe building to Native Americans so that they can perpetuate the knowledge within their own cultures, and to demonstrate this fascinating and unique construction method in an area where boatbuilding skills are in no short supply, but where the bark canoe is, as everywhere else, a real rarity.

Go here for more details on the auction and to purchase tickets. The drawing will be July 1, and of course you do not have to be present to win. The winner will, however, have to pick up the boat; it won't be shipped. This will give the winner a great opportunity to visit Maine and, if the winner is one of my readers, to get a tour of a great marine museum by none other than your dedicated blogger. Heck, I'll even buy coffee.
Posted by Bob Holtzman at 5:23 PM No comments:

The Hudson Museum of Anthropology at the University of Maine, Orono, has several nice models of indigenous boats on display, in addition to the ceramic model of a reed boat from Peru's Moche Valley that I showed in a previous post. 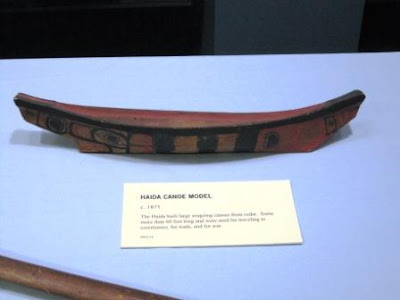 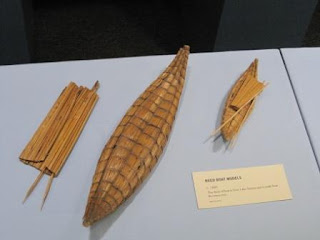 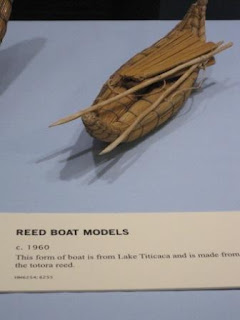 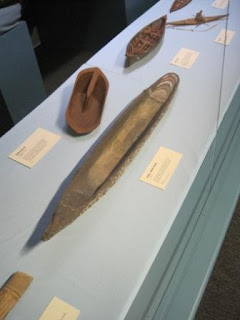 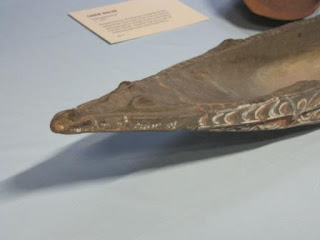 I'll quote the exhibit signage: "Iatmul Canoe Model, c. 1980. Crocodile canoes or waivara were used by bands of sorcerers to pass magically up and down the river, traveling just beneath the water, like a crocodile." The Iatmul people are from Papua New Guinea, and maybe the sorcerers think they travel beneath the surface, or maybe try to convince others that they do so, but the signage says they actually do so. Hmmm. Anyway, it's a nice piece of sculpture. 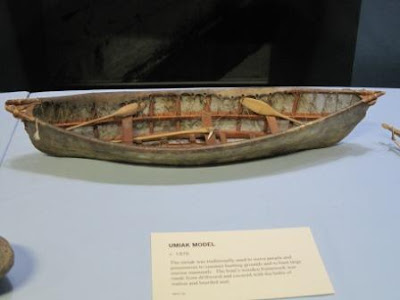 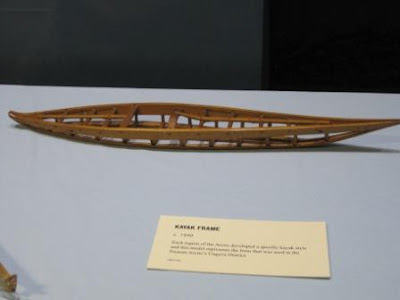 A model of the frame of a round-bottomed kayak from the Eastern Arctic's Ungava District. c. 1940 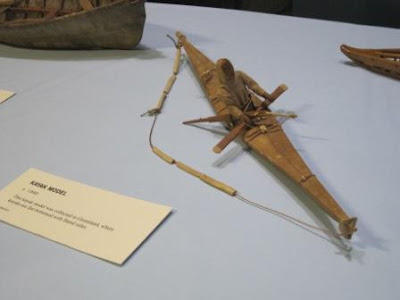 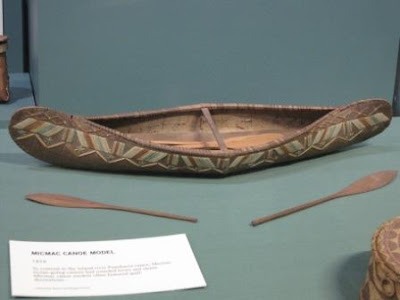 Model of a Micmac ocean-going canoe, decorated with dyed porcupine quills, along with paddles. c. 1856. Like many boat models made by indigenous people, this one is lacking in accuracy in many respects, but it is lovely nonetheless. It was probably built as a souvenir for the tourist trade.
Posted by Bob Holtzman at 12:11 PM 2 comments:

Scattered among various exhibit cases at the Hudson Museum of Anthropology (see previous post for a brief introduction) is a nice collection of canoe paddles. 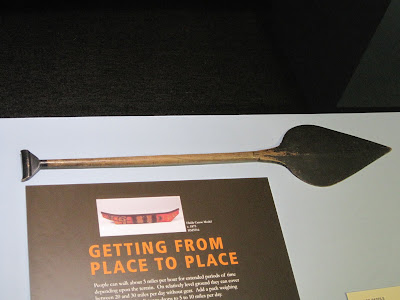 A Shipibo canoe paddle (c.1940)  from the Ucayali region of the central Peruvian Amazon. Used with a dugout canoe, of course. (All photos are clickable for a larger image.) 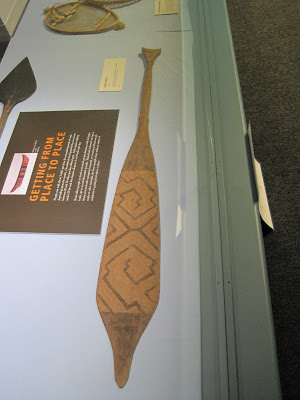 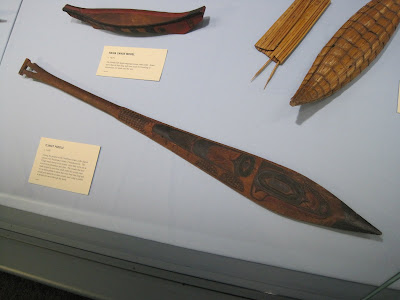 A Tlingit paddle, c. 1880. If anyone can make out the design motif on this, please post to the Comments. 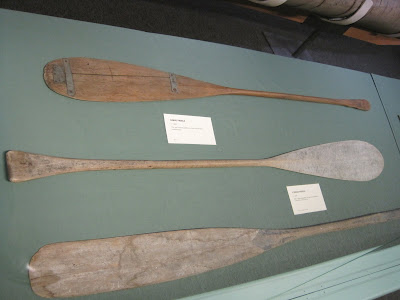 Three paddles from Maine, probably all Wabanaki and probably all carved with crooked knives. The top one must have been well-loved: note how it was mended with metal straps. The middle and bottom are long stern paddles. 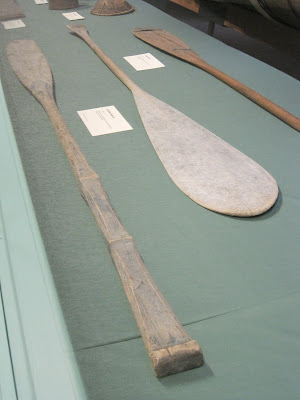 The same three paddles as the previous photo. Interesting segmented extended grip on the longest one.

Boats at the Hudson Anthropology Museum, #1

The Hudson Museum a brand new museum associated with the department of anthropology at the University of Maine, Orono (near Bangor). Rather small, it nonetheless has fine exhibits, is well worth a visit, and has a surprising number of boat-related artifacts on display.

I'll try to cover several of their boat artifacts in a series of posts. For now, we'll look at an interesting ceramic boat model from the Salinar culture of Peru's Moche Valley. 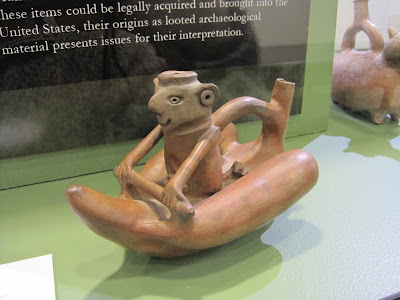 
Salinar Stirrup Vessel, c. 500-2000 BC
The Salinar were precursors of the Vicus, developing in Moche Valley. The vessel depicts a man on a reed raft,  similar to the ones studied by Thor Heyerdahl and used as models for Kon-Tiki.

I don't quite follow the Kon-Tiki reference, since that raft was made of logs, not bundles of reeds. The model's shape is reminiscent of a reed float composed of one longer central bundle flanked by two shorter bundles. It's also quite reminiscent of a log jaganda -- a Brazilian raft-boat that I've blogged about several times. I'm not suggesting that the model depicts a jaganda -- only noting the similarity.

This isn't just a simple model, however. It's a "whistling jar," a noisemaker or musical instrument of a type made in a great variety of styles and designs by this culture, depicting people, animals, vegetables, and in abstract designs. The diagram below shows how it works. 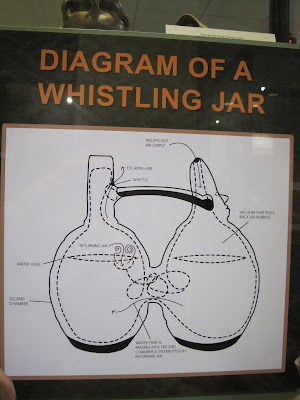 Since the labels are not easy to read, I'll repeat them in clockwise order, starting at the top:
12:00 Insufficient air supply
2:00 Vacuum that pulls back air bubbles
6:00 Water that is passing into the second chamber is interrupted by returning air
8:00 Second chamber
9:00 Water level
9:30 (inside jar): Returning air
11:00 (top) Escaping air
11:00 (bottom) Whistle
Posted by Bob Holtzman at 5:22 PM 2 comments: