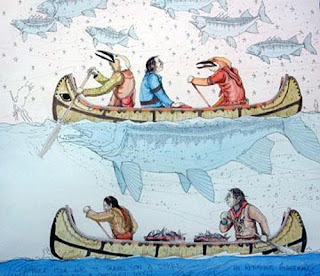 Here's a project worth supporting, and it'll cost you nothing but your vote:
Anishinaabe Babamadizwin: A Journey By Canoe will work with at-risk Anishinaabe (i.e., Ojibway) youth to build both birchbark and cedar/canvas canoes, and then use those canoes on wilderness voyages. To quote the organization's description on the Aviva Community Fund site, "Such canoe trips could develop leadership skills as well as increase awareness of their Native culture and traditions. The youth participants return to their communities as future leaders."

The organization is competing for a grant from the Aviva Community Fund by soliciting votes from the general public to demonstrate widespread interest and support for the project. To add your voice, go to the project page and register, then vote either on the page itself, or by "liking" it on Facebook.
Posted by Bob Holtzman at 1:47 PM No comments:

In our last post we looked at Paul Wilson's photos of Philippine bancas. This time we'll view Paul's images of longboats from Myanmar. (I've always heard such boats referred to as "long-tails," but it appears that both terms are in common use.)

The Myanmar (Burma) photos were pre-digital scans of some photos I took while working/touring there in 1999 or 2000.  The photos are of longboats in Inle Lake in central Burma.  I was interested in the articulated drive mechanism.  Unlike the longboats in Thailand, the engine is stationary with a universal joint at the transom.  The pipe in the wash from the prop is for water cooling to the engine. Very simple and effective.  I loved these boats and their chug, chug, chug with their big Chinese diesels.  The long bow allows them to extend out over the shore for easy loading and unloading at the market.

I agree. This leg rowing is fascinating stuff.


In contrast, Thai longtails mount the engine right on the transom, atop a pivot. This is mechanically simpler, in that it eliminates the universal joint for the driveshaft. It has a substantial downside, though: placing the weight of the engine entirely on the transom must make the boat very stern-heavy. It also orients the prop shaft at a downward angle, which reduces propulsion efficiency. To minimize this problem, the shaft is very long (making the angle shallower), but this "solution" compounds the problem of a long, awkward extension behind the stern. The Burmese arrangement, with its horizontal prop shaft, is shorter and inherently more efficient.
Thanks again to Paul Wilson for the Myanmar photos.
Posted by Bob Holtzman at 7:50 AM 13 comments:

Reader Paul Wilson sent me a bunch of wonderful photos of boats from various parts of Asia which we'll looking at in this and the next several posts. We'll start with Paul's photos of bancas or paraws, the double-outrigger canoes of the Philippines. (Earlier posts examined banca hull and outrigger shapes, banca propulsion and steering, and banca construction details.)

The Philippines Paraws (Bancas) photos were taken in 2002 at the island of Corregidor in Manila Bay.  I loved seeing how the outriggers were attached using heavy fishing line and pipe fittings.  Very practical.

The garbage from Manila floats across the bay.  As you can see, it is a bit of a problem. 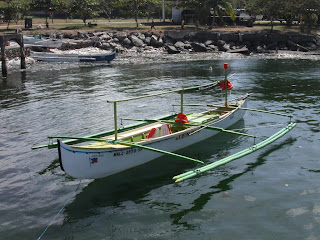 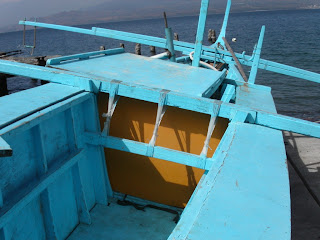 Tune in again soon for more photos of indigenous Asian boats by Paul Wilson, to whom we give sincere thanks.
Posted by Bob Holtzman at 4:20 PM 3 comments:

The Moken are an Austronesian people pursuing a nomadic maritime culture in the Andaman Sea. These "Sea Gypsies" live in the Merguyi Archipelago, several hundred islands off the west coasts of Myanmar and Thailand, traditionally spending eight or nine months of each year on the water, and coming ashore only during the monsoon season, during which they would set up temporary communities on islands relatively isolated from the larger mainland societies close by.
The kabang is the traditional boat of the Moken, and while propulsion has shifted from a single woven pandanus square sail to outboard engines, the rest of the boat appears to be little changed. It is built on an expanded dugout base, with three strakes per side extending the freeboard to make a hull tall and wide enough to serve as a family home.
The dugout base is bifurcated at both ends. Tradition holds that these features represent the living nature of the boat: a mouth at the front and an anus at the rear. The practical purpose, however, is to serve as boarding ladders -- an essential feature because much Moken fishing consists of free-diving for finfish, shellfish, sea cucumbers and the like, and a dramatic form of spearfishing in which the fisherman leaps from the boat's bow with a harpoon in hand.  (Moken are accomplished free divers, commonly remaining submerged for three minutes or more. Moken children's eyes adapt to achieve underwater visual acuity twice that of Europeans.)
During construction, the dugout base is expanded (i.e., widened) by inverting the hollowed log and heating it over live fire. The log is then flipped over and, while it is still hot, temporary cleats are slipped over the gunwales near both ends to hold their shapes and prevent splitting. Then V-shaped clamps are slipped over the gunwales closer to midships on both sides and the clamps are levered outboard, pulling the sides with them.

The wide strakes that are added above the dugout base are traditionally split, not sawn, so that only two planks could be gotten out from a single tree. They are reportedly sewn and pegged in place, but I've found no details on these procedures. Ribs are inserted, and the planks are caulked. (Several photos seem to show the raised sides built not of wide planks but of very narrow strips -- possibly split bamboo?)

Partial decks of narrow planks are laid, and a house whose sides and roof are built of pandanus leaves is added. The sides of the house tilt outward, following the rather shallow angle of the hull sides and no doubt creating a bit more shoulder room inside.

I've not seen any measurements, but I would guess the kabang's length overall at 40' or more. Here's a photo essay showing and further explaining several of the construction steps: unfortunately the images are very small.

An organization called Moken-Projects has partnered with the Kon Tiki Museum to test the sailing characteristics of the kabang in Norwegian waters. Apparently, someone has perceived similarities between the kabang and some ancient Norwegian rock-carvings, and come up with a hypothesis that there's an evolutionary connection between the maritime traditions of Scandinavia and Southeast Asia. Sounds pretty silly to me, but not surprising for a museum founded on the legacy of Thor Heyerdahl. (The perceived similarity is probably that of a bifurcated bow, but several scholars believe the Norwegian carvings represent skin-on-frame boats, not logboat-derivatives, and I believe the rock carvings do not show bifurcated sterns like the kabang's.) (Here's a link to Moken-Projects, but beware: when I visited, some pages were infected by malware.)

The Moken culture is in fairly dire condition, with perhaps 3,000 or 4,000 members remaining in total, and possibly as few as 1,000 still pursuing a traditional maritime-nomadic lifestyle. A movie called "No Word For Worry" about the Moken people and Moken-Projects is in production.

In 2000, a drought in Florida caused the water level to drop on Newnans Lake, near Gainesville, leading to the discovery of remnants of more than 100 dugout canoes. Fifty five of these canoes were carefully examined and studied, with radiocarbon dating placing 41 of them in the Late Archaic period (2300 to 5000 B.P.) A paper on the findings states:
"The Archaic period canoes from Newnans Lake are indistinguishable from canoes produced in later periods [in Florida, ed.] and are not the crude, short, blunt- ended type thought to represent the earliest dugout canoes." (ARCHAIC PERIOD CANOES FROM NEWNANS LAKE, FLORIDA Ryan J. Wheeler, James J. Miller, Ray M. McGee, Donna Ruhl, Brenda Swann, and Melissa Memory; American Antiquity, Vol. 68, No. 3 [Jul., 2003], pp. 533-551)

The paper included this graphic, comparing the ends of three of the Newnans Lake canoes with a couple canoes found elsewhere in Florida:
This got me thinking about the shapes of the ends of dugout canoes and how, for such a superficially simple technology, they exhibit a tremendous amount of variation, almost as great, perhaps, as that of plank-built boats, which differ worldwide according to local custom, habit, and conditions. (I'm purposely leaving outrigger-equipped dugouts out of this discussion, as the addition of an outrigger affects the canoe's roll stability and directional stability, and these effects might impose or permit even more variables.)

No doubt the earliest dugouts were blunt-ended, similar to Newnans Lake #19 in the image above, if one accepts that the shaded area in the profile view was indeed present in the boat as built. Regardless of their level of technology, anyone observing the behavior of the water at the bow of this design as the canoe moved forward would have eventually recognized that a smoother shape would be more efficient. The earliest modification was probably to round the ends.

Following that, the quest for efficiency might have led in two directions: toward a flat, overhanging bow, or toward a wedge-shaped bow, which might initially have had a straight vertical stem, gradually adopting a sloped, rising shape.
I believe the wedge-shaped bow would be more efficient through the water, but the overhanging design has the advantage of being able to be beached bow-in, making loading and unloading easier. In contrast, a wedge-shaped bow with a vertical stem is highly unstable when beached perpendicular to a sloping shoreline.
It must have been thousands of years before more sophisticated (or decorative) shapes came into use. The overhanging platform shown in the Moon Lake canoe in the top illustration might give a spear fisherman a place to stand forward of the disturbance caused by the stem moving through the water, giving him a crucial few inches in which to make his strike. A similar platform for a poler in the stern would improve his view and ability to navigate through flooded grassland like the Everglades.

A well-rounded bow like the one below provides plenty of buoyancy, while the raking stem allows it to ride easily over small waves. The pinched knob at the very end might make the end more resistant to splitting.
These extended bows below could serve as carrying handles, or to help part the vegetation when moving through a swamp.
The heavy, blocky bow here seems to favor durability and simplicity of construction. The stern appears to be somewhat more refined, thinner, but with a transom shape somewhat like the bow. I suspect that, like the bow, the bottom of the stern transom is above the waterline, permitting the smooth wake.
I hesitate to address the variety of bow shapes employed by the First People of the Oregon/Washington/British Columbia region. These were complex, of great variety, and deserve an extended treatment of their own.