There's really no connection between these two stories, aside from the fact that they're both about dugouts. 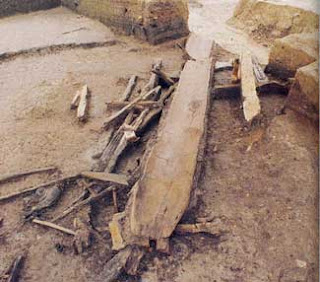 First, we have one of the oldest dugout canoes ever discovered, at Kuahuqiao in south China. Dated to 8000 years BP (before present), it's firmly in the Neolithic period, coeval with the early domestication of animals and the earliest instances of agriculture. While far from complete, the canoe and related artifacts present intriguing glimpses into this extremely early example of timber boatbuilding.


Construction of the pine hull was probably done with a combination of stone adzes, which were found at the site, and fire, examples of charring being detected on the hull. Also found was piece of woven matting attached to frame of light timbers -- very likely a square sail and spars. It has been suggested that smaller timbers found near the hull might have been part of an outrigger assembly, but the upper parts of the hull, where outrigger booms would have been attached, are missing. So what was probably a sailing canoe might or might not have been supported by an outrigger.


Three paddles were found in the assemblage, two of them apparently unused and placed carefully beside the canoe. This would appear to be in keeping with the notion of a ritual interment, but the absence of other ritual items beside the hull makes this notion difficult to support.


Among remains of several game species at the site were those of dolphin, probably indicative that the people who built the canoe used it to hunt at sea.


Here's a great video with much to teach about expanded-and-extended dugout construction in the modern era. The canoes were used to gather marsh grass, presumably for fodder.

Here are 94 fine photos showing contemporary bay and river life in Vietnam and the pervasive use of indigenous boat types there even today. The photos were taken by Capt. Rob Whitehurst a couple months ago, the great majority on the Mekong Delta, and the last few -- showing tall, towering rocks rising dreamlike from the water like an antique Chinese print -- on Halong Bay, close by Haiphong and not far from Hanoi.
,

Capt. Whitehurst was our source for the Junk Blue Book of 1962, which we offer as a free download. This a thoroughly detailed catalog of Vietnamese boat types compiled by the U.S. Dept. of Defense during the early days of the "American War" and well worth a look. Thanks to Rob again for these photos.
Posted by Bob Holtzman at 11:19 AM No comments:

The bark canoes of the Australian Aborigines of the Murray River were among the simplest true boats ever built. Even so, they played an important role in the peoples' subsistence economy, and they had a kind of natural grace.
The Murray, with its major tributary the Darling, is the largest river system in Australia, running over 2,300 miles through a variety of terrain and ecosystems. It's not surprising that such a dominant geographical feature should have played a role in the material culture of a people. The Aborigines built bark canoes for hunting and fishing, and for transportation across the rivers in the system.
The canoes were formed from a single piece of bark of the river red gum tree (Eucalyptus camaldulensis). A man would climb a tree and cut a lozenge-shaped section of bark, using either a stone axe or sharpened sticks. On occasion -- especially where the bark being taken was high on the tree -- the builder would cut hand- and toe-holds into the bark as an aid to climbing. Flat, flexible sticks were pressed between the bark and the wood all around the cut, being forced in bit by bit. Before the bark came away from the trunk, a line was passed around it to prevent it from falling to the ground. (The wood of the river red gum, by the way, is too dense to serve as a good dugout canoe, and even the bark is somewhat difficult to work.)


Once flat on the ground, small sticks were placed under the bark to support its perimeter edges and small fires were built on top to evaporate much of the sap. This also caused the center to sag down, increasing the curvature of the hull and the height of the sides. A few sticks were placed across the hull from sheer to sheer to prevent the bark from curling inward too far, and sometimes these were left in place, in the nature of thwarts, when construction was complete.


The end of the bark that was lower on the tree was always at the stern. This was much thicker than the bark at the other end, and often it could not be bent up sufficiently. In such cases, the stern would be closed in with a transom made from clay mixed with grass or other vegetable matter.


The canoes were propelled with a pole about 14' long. In deeper water, this was used in the manner of a double-bladed paddle. In shallow water, the canoe was poled, always using the thicker end of the pole against the bottom. The narrower end was sharpened and served as a fish spear. The paddler always stood, except when hunting, when he crouched. Passengers would crouch or sit.


Canoes varied in size from one-man boats as short as 8' to boats over 20' capable of carrying as many as eight people. A big boat might have freeboard of 8", and beam was usually around 30", rarely more than 36". Stability apparently varied, with many European descriptions emphasizing the canoes' tenderness, while at least one claimed that one could climb into a large canoe from the water, over the side, without upsetting it. There are numerous recorded instances of both Aborigines and Europeans upsetting or swamping the canoes. Most Aborigines were apparently good swimmers, and this was rarely a disaster for them.


Aborigines would fish and hunt from the canoes. One fishing technique was to stir up the bottom of the muddy river with the pole in an area suspected of harboring fish. When fish then fled into areas of vegetation, the paddler would follow their progress and deduce their location by the movement of the plants, and then thrust his spear "blind," so to speak, but often successfully.


For night-fishing, a small fire would be built near the bow on a platform of mud, bark and sticks. The fire would attract fish, which could then be speared by sight. One man would tend the fire, while another would handle the boat and wield the spear.


Early European explorers and settlers used the canoes, sometimes stealing them from Aborigines; sometimes acquiring them through barter or commissioning their construction, and occasionally building them for themselves after having observed the native techniques. One European recorded using a bark canoe to ferry as many as six sheep at a time across a river. Another told of carrying 400-pound bales of wool.
Of course, as European settlement progressed, European-style boats soon came into use, and Europeans generally ceased using bark canoes. Then, as Europeans came to dominate the riverfront land, they prohibited Aborigines from taking bark from their trees, and the use of the bark canoe died out entirely.


(Most content and all photos from: Aboriginal Bark Canoes of the Murray Valley

by Robert Edwards.)
Posted by Bob Holtzman at 2:35 PM 2 comments: