A Maine man suspected in an assault in the town of West Gardiner managed to elude police by commandeering a kayak and paddling away, according to this article in the Portland Press Herald. Police then sought assistance by radioing some game wardens who were in a boat nearby. When the wardens approached the suspect mid-lake, he did a wet exit and managed to escape by swimming away! No word on what sort of boat the game wardens were using, but it was evidently slower than a swimming man.
Posted by Bob Holtzman at 7:17 AM No comments:

Email ThisBlogThis!Share to TwitterShare to FacebookShare to Pinterest
Labels: kayaks

According to a slide show on the Washington Post, a group called "Bikes for the World" is collecting used bicyles (bear with me here; I'm not off-topic) in the Washington, DC, area and shipping them to Costa Rica, where, it appears, they're sold to adults and/or donated to kids. The fees that they charge adults -- up to $60, plus finance charges -- seem outrageous, and I really question what this "charity" is about. (I can buy a brand new adult bike at WalMart for about $60 - not a very good one, but new.) But the slideshow (once you get past the obnoxious Cisco video clip) features a few photos of some fine dugout canoes, still evidently used very functionally by indigenous people in Costa Rica.
Posted by Bob Holtzman at 4:25 AM 2 comments:

According to an article by Reuters, a large unfinished cedar dugout canoe, thought to be about 500 years old, has been discovered near the village of Kasaan on Alaska's Prince of Wales Island. Inhabited by Haida and Tlingit people, the area is a rainforest, making the survival of such an artifact all the more extraordinary.

Thanks to Silvio Antunha for pointing this one out.
Posted by Bob Holtzman at 5:29 PM No comments:

I shouldn't be blogging this weekend: I should be on a week-long canoe trip on the West Branch of the Penobscot River. But a bad back forced cancellation of the trip, so instead, while I'm sitting around healing, here's the third of three posts on Philippine bancas, this one concentrating mostly on construction details. (Previous posts on bancas are here and here.) As always, click any image to magnify.

Photos courtesy of Capt. Rob Whitehurst; please do not re-use without permission.
Posted by Bob Holtzman at 10:07 AM No comments:

This is a continuation of the previous post on the Philippine banca, a wide class of double-outrigger canoes still in general use.

As in the previous post, all photos used here by kind permission of Capt. Rob Whitehurst. No further re-use permitted.
Posted by Bob Holtzman at 6:32 PM No comments:

Friend and contributor Capt. Rob Whitehurst sent me a bunch of photos of Philippine bancas that he shot in the 1980s on both sides of the San Bernardino Strait, which separates the islands of Luzon and Mindoro. The banca is a double-outrigger canoe. Most have inboard engines, although some of the smaller ones still use sail.

Lest anyone fear that the banca might have disappeared in more recent years, Rob did some searching on Google Earth and provided several satellite photos of the same area, of which one is shown below. As can be easily seen (click the image for an enlarged view), bancas are still quite numerous -- they're the water-bug-like structures floating all along the waterfront. They are used for both cargo and passenger transportation and for fishing. 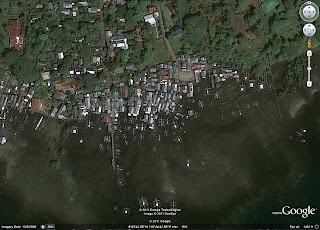 There's much variety apparent in the boats in Rob's photos -- enough to form the basis for at least two blog posts, of which this, the first, will look at general hull and outrigger configurations.


With all this variety, it appears that the banca is not a highly specific type. Instead, it must be a general term in the Philippines for any double-outrigger boat. More bancas to come in future posts. (With the exception of the Google Earth satellite photo, all photos here are property of Rob Whitehurst; used by permission. Permission is not granted for further re-use.)
Posted by Bob Holtzman at 1:47 PM 6 comments: