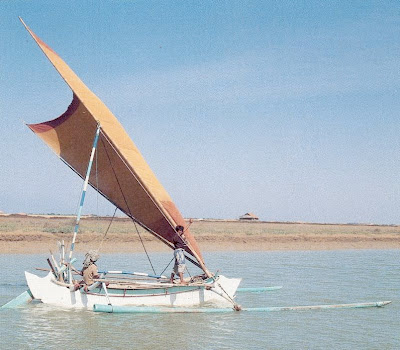 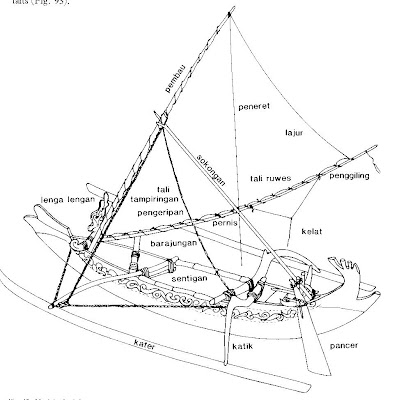 Here's an interesting rig, found on outrigger canoes (especially double-outriggers) in Madura, Indonesia. Called variously the Madurese Jukung Rig (a simple descriptive term), the Primitive Oceanic Lateen (so-called by Haddon and Hornell), and the Protolateen Rig (by Horridge), it is a two-boom triangular sail with no mast. I'm posting a photo and line drawing of the same basic rig, though the two boats are somewhat different.

The prop that supports the upper boom (the blue and white stripped pole in the photo), and hence the whole rig, can't be termed a mast, since it's movable and neither stepped nor supported by a thwart. Depending on the point of sail, much of the rig's weight bears on the tack, the forward corner where the two booms meet, which rests on the bow of the canoe itself. Guys or shrouds are rigged from the sail's upper boom back to both stern outrigger booms, to keep the rig down and keep it from blowing overboard. And in some examples, another line runs from the upper boom forward and down through an eye at the forward outrigger, and then back to the helm station. I believe that when tightened, this line keeps the tack down when sailing on the wind. When running downwind, I think this line is loosed so that the tack can lift and the whole rig be oriented somewhat athwartships.

Adrian Horridge, whose book Outrigger Canoes of Bali and Madura, Indonesia I cited in my previous post, believes the Protolateen rig is the original rig of the Austronesian people, that that all other Pacific rig types (with the exception of Western rigs introduced much later) derive from it. I won't try to paraphrase his complex arguments, but the diagram below shows his theory for the diffusion and evolution of the various Pacific rig types. 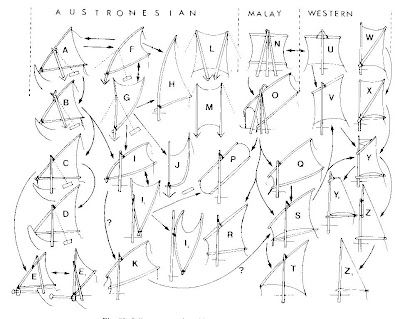 The Protolateen rig is shown in A, and a slight modification, with the upper boom hanging by a short line from the prop, is shown in B. It's easy enough to imagine either of the next stages of evolution: the addition of a short mast from which to hang the upper boom (C), or stepping the forward end of the upper boom and turning it into a quasi-mast (with stays or shrouds), while doing away with the movable prop (F).

Two other interesting details to note:

All of the art here is from Outrigger Canoes of Bali and Madura.