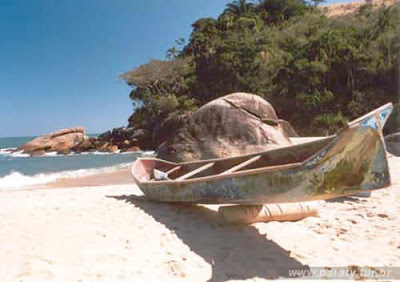 It will come as no surprise that the traditional Brazilian dugout is fading in popularity – like most indigenous boats (indeed, like much indigenous culture) around the world. According to materials provided by my source, Silvio Antunha, forest protection laws enacted in the 1970s have made it difficult to obtain trees suitable for the construction of traditional dugouts in Brazil, and the knowledge and skills are on the wane as older builders leave the scene without an opportunity to pass that knowledge on to a new generation.
The boats are sometimes called vogue canoes (or bogue in Caiçara pronunciation), vogue being the term for paddling, the stroke or rhythm of paddling, or the paddler who calls the stroke. Smaller caiçara canoes, like those shown in my previous post, are usually built from softwoods like guaperuvu (Schizolodium parahybum), while larger ones – up to 40 feet long! – make use of more rot-resistant woods like jequitibá , and oars (paddles?) and other components are made of jacatirão (Tibouchina pulchra), massaranduba (Mimusops brasiliensis) and caixeta (Tabebuia cassinoides).
It appears that larger boats have added strakes and built-up bows and sterns for higher freeboard, and these may be referred to as “sewn” boats. (The rather rough, machine-translated document I’m relying on uses the term “embroidered.” It also uses the term “rowing” which, I believe, implies for paddling. For the original, see here.) I’ll quote at length:

The rowing canoes of this size are propelled by a team of several paddlers, using even sailing gears, when it has a mast fixed on the front of the vessel. As the vogue canoe has no keel, the sails (which could reach the number three) are used only with winds from the stern of the vessel.

People could spend a week to go and return to Santos, depending on the conditions of the ocean and the winds. Most of the farming production and the cachaça (sugar cane
rum) of the northern coast was shipped by this type of vessel.

From the 1920s, the vogue canoes began to be moved by motors. 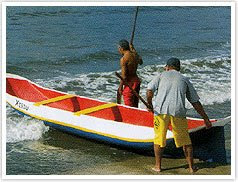 It's interesting that these boats, which are reportedly very unstable, were used for coastal freight carrying, and under sail. The strikingly colorful paint schemes, as shown above and in the previous post, seem to be characteristic of the craft. For more nice photos like the one above, and text in Portuguese, see this page from the Oceanographic Institute of the University of São Paulo.
Correction to previous post: The phrase “to pull,” meaning to build a canoe (by “pulling it” out of the tree trunk) comes from a Caiçara term, not Portuguese.
Addition to previous post: photos were taken by Fernando Costa
Posted by Bob Holtzman at 4:06 PM