The Abbe Museum in Bar Harbor, on Mt. Desert Island, Maine, is dedicated to showing the history and culture of Maine's Native Americans. Set right in the center of town (which is a zoo on a summer weekend), it's new, slick, somewhat on the small side, somewhat political in nature, and it has a few canoe-related artifacts. This post will focus on the museum's only full-size birchbark canoe. The next one will look at its collection of models and other canoe depictions. (As always, click any image to enlarge.)

I'll introduce the canoe by quoting the exhibit signage:


Canoe: Atikamekw (probably Manawan First Nation), Late 1800s
This canoe was built at St. Alexis des Monts, Province of Quebec, in the late 1800s. Algonkian in design and construction, it is similar to canoes that were used by the Passamaquoddy and Penobscot Indians of Maine.

Roughly similar, perhaps. There are many notable differences between this Algonquin canoe and the Wabanaki canoes of Maine, but I guess the museum couldn't get its hands on an authentic and historical Maine Indian canoe, so this one had to do. 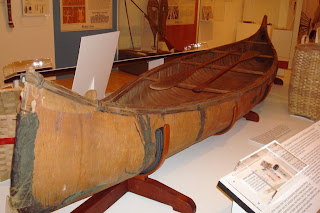 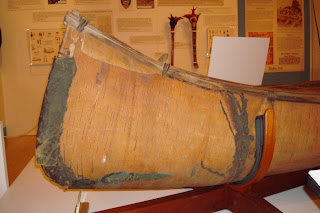 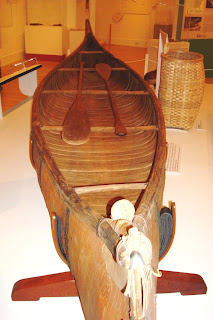 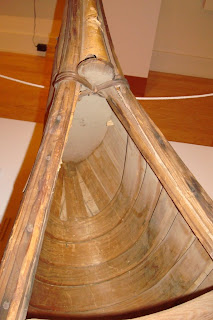 The headboards are unusual in having a strong convex curve inboard. Most curved headboards curve the other direction. This one is the bow, I believe. 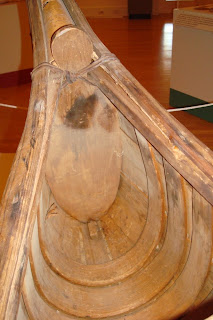 Stern headboard. I like the rounded top, maybe symbolizing a man's head. 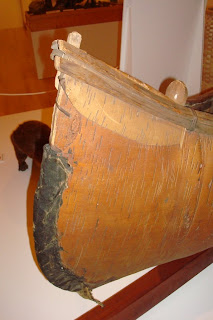 Note how the sternpost rises above the gunwales. Also note the wulegessis, the decorative flap/deck of bark that is sandwiched between the gunwales and the hull. 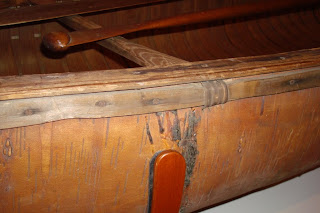 Only the thwarts were lashed. The gunwales and their connection with the bark covering were assembled with nails. 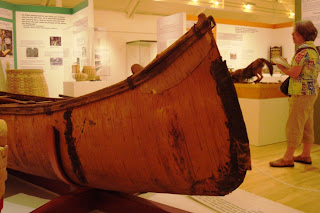 The bow, I believe. 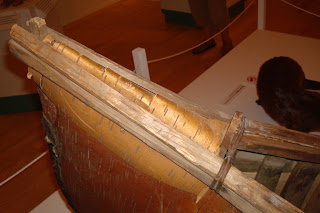 Top view of the wulegessis, showing treatment of the gunwales, caps, and headboard lashing arrangement. 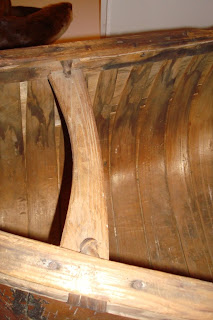 Quarter-thwart, deeply curved with the concave face facing the end of the canoe. 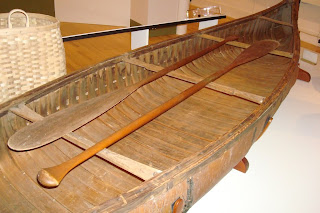 Interior, showing two paddles made by Joe Mell, Passamaquoddy, in 1904. 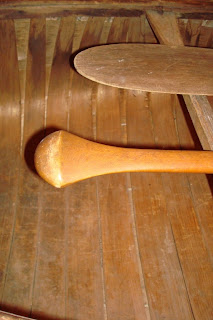 One of the paddles has a conventional Penobscot-style grip. 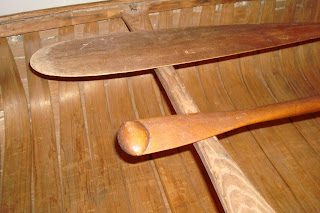 The other paddle has an unusual, attractive ovoid bulge with a sharp line, rather than a smooth transition, where it meets the flat base of the grip. 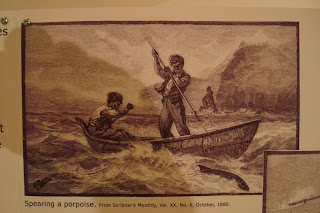 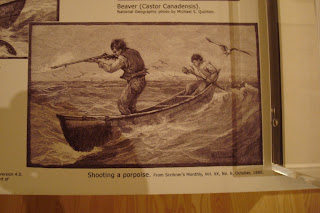 ...and with guns. This would take some pretty steady shooting and a lot of trust in your stern paddler.
Both of the Scribners images also appear in the new book Indians in Eden, about the Native Americans of Mt. Desert Island. (Eden was Bar Harbor's original name.) The book has significant content about their use of birchbark canoes for both traditional economic activities, and for employment in MDI's early tourist economy.
Posted by Bob Holtzman at 9:52 AM