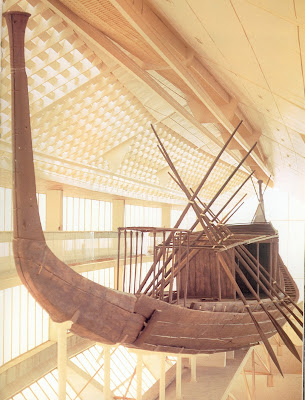 A large boat discovered disassembled in a pit at the base of the Great Pyramid of Cheops is at once the oldest, largest, and most elaborate prehistoric vessel known. Unusual in so many respects and unexplained in many more, it is worth a look.

The Pharaoh Cheops, also known as Khufu, built the largest of the Egyptian pyramids, around 2600 BC. At its base, a long, narrow pit was excavated into the bedrock, and a ship, carefully disassembled, was deposited in it. The pieces were laid in logical order, as if the ship were meant to be reassembled for use in the king's afterlife. The pit was then sealed so effectively that the wood, and much of the rope and other fibrous material remained in excellent condition when the pit was discovered and opened in 1954. After years of study, the boat was reassembled and is now housed in a purpose-built museum directly over the original storage pit.

At 143 feet  LOA and 19.5 feet beam, with outrageously long overhangs, this is still an impressive vessel, and its size and elaborate construction bear proof that it was the result of centuries of technological evolution. It is clear, therefore, that Egyptian plank-built boats go back to an unknown antiquity -- certainly into the 4th millennium BC.  With its sharply upturned stem rising high above the waterline, and its sternpost that rises even higher and bends sharply toward the bow, its shape is described as "papyriform," meaning that it mimics the shape of papyrus reed boats (i.e., rafts, or floats). It is not believed that it was a technological descendant of the reed float -- their construction bear no similarity at all to each other -- but rather, it copied the well-known shape of the reed float for ceremonial or religious purposes. Several of the culture's deities, including the sun god who was closely associated with the king himself, were said to make voyages on reed vessels, which obviously predated planked ones as -- one can safely conclude -- did the stories about them.)

I feel comfortable addressing this plank-built boat here because its construction is decidedly outside the western plank-on-frame tradition. It was shell-built of short but very thick planks of cedar, imported from Lebanon. As shown in the planking diagram, the planks were nibbed to interlock, providing some longitudinal strength to the shell. Planks were edge-joined with dowels, and then lashed to one other with ropes passing through holes bored on the insides of the planks in an over-under stitch. The holes do not penetrate the thickness of the planks, but form U-shaped "tunnels" which enter and exit on the same, interior, face. Half-round battens were placed on the inside of the plank seams and were held in place by the same rope lashings. Caulking was apparently not used, but I speculate that caulking material may have been necessary, and simply was not included in the boat burial.

Widely-spaced frames supported stringers at their upper ends, and stanchions that rested on the middle of the frames supported a central stringer. These provided the majority of the longitudinal strength, and deck beams , notched into the central stringer but only butted against and lashed directly to the planking at their ends, provided most of the transverse strength. 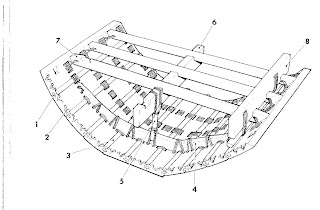 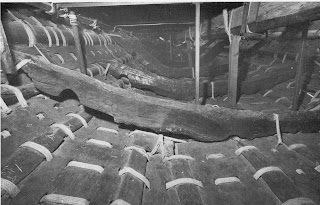 Planking "wings" at both ends extended far beyond the planks of the hull's displacement shell, providing a fastening base for the large papyriform stem- and stern-posts.

While the basic method of shell construction was, and still is, used throughout the Indian Ocean region (especially in the construction of dhows) and elsewhere, its details in this case seem not to have been transmitted into any surviving boatbuilding tradition. To call it a dead end seems unfair, as it was a tremendous technological achievement for a people who had limited access to good boatbuilding lumber, and who created an extremely sophisticated boat literally millennia before any evidence of any planked boatbuilding elsewhere whatsoever, but in fact it seems not to have contributed significantly to the evolution of later boatbuidling methods.

It was equipped with 10 long oars, obviously to be used standing up on top of the midships canopy and facing forward. It is doubtful, however, whether this provided sufficient propulsion to move such a large vessel. The oars may have been mainly for looks and ceremony, and the boat, if indeed it was used on the river, may have been towed.

The all-glass museum in which the boat resides was the cause of scandal, as it was not originally equipped with air conditioning, and the extremes of temperature which built up inside imposed greater danger to the restored artifact in a few years than millenia underground had done. In fact, the museum was not open to the public for many years for good reason: imagine visiting a greenhouse in the Egyptian desert! But an article in Wikipedia seems to indicate that the museum is now open to the public, so perhaps the climate control issue has been sorted out.

All images in this post are from The boat beneath the pyramid: King Cheops' royal ship

by Nancy Jenkins. As always, click any image for a larger view.
Posted by Bob Holtzman at 8:49 AM