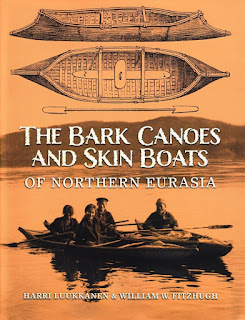 There are strong but superficial similarities between The Bark Canoes and Skin Boats of Northern Eurasia, a new book by Harri Luukkanen and William W. Fitzhugh, and the 1964 classic The Bark Canoes and Skin Boats of North America by Edwin Tappan Adney and Howard I. Chapelle. Obviously, there is the title, clearly meant as a respectful acknowledgement of the older work. The two books have the same publisher (Smithsonian), and the same format, both being oversize, printed in black and white, with the text laid out in two columns per page. Luukkanen and Fitzhugh even call their work a “sequel” to Adney & Chapelle. In spite of all this, Northern Eurasia really is a different sort of book from North America. This makes it no less excellent than the older work that it honors, but to appreciate this, the reader must overcome any preconceptions that the similarities might instill. Taken on its own terms, is excellent scholarship and a valuable contribution to the field of small craft studies.

The book’s Introduction contains an explicit homage to “Adney & Chapelle” and a description of that book’s origins. It then goes on to describe the rationale for the present study, which basically boils down to two facts: in spite of the vast region’s long and pervasive use of these types of watercraft, the subject has never been systematically studied; and most studies of particular boats or types in the region are not available in English – or, indeed, in any Western European language. The Introduction then defines the geographic area of the study and the types of boats under consideration.

Chapter 1 describes the geography of northern Eurasia, including overviews of its climate zones, and river systems, cultures and their histories, and a brief contextualization of the region’s archaeology and the relationship between boat studies in northern Eurasia and North America.

Chapter 2, titled “Boat Classification, Construction, and Regional Distribution”, is essentially a summary and synthesis of Chapters 3-9, each of which focuses on a different geographic sub-region of northern Eurasia. The authors present a typology of the region’s various bark canoes and skin boats, based on major construction methods and morphology, and divided along lines of geography and culture groups. The authors conclude that bark canoe types tend to be fairly consistent within major river basins, even if more than one culture is resident, and that this intra-basin consistency is greater than that found among single cultures whose territories run across two or more river basins. The authors also draw attention to the large varieties of open and decked skin boats, both of which were found to be widely distributed across the region among a great many of its cultures.

One might question the placement of this chapter before, rather than after, the presentation of data in chapters 3-9. For scholars who are knowledgable about Eurasian cultures, this will make good sense, as a summary and synthesis may be primarily what is needed, and the reader can use it as a guide to targeted reading of the following chapters. For many readers, though, it may prove confusing or frustrating, as much of the geography and many of the cultures discussed will be unfamiliar to most Westerners. For readers (myself included) who don’t know the Vepsians, the Evenks, the Yugra, the Kereks, and many other cultures mentioned, the chapter is somewhat bewildering, in spite of brief overviews in the Introduction. Such readers might be advised to read this chapter later.

As the authors note, it is ironic that northern Europe – the area probably most familiar to most readers, and the one for which there is the best historic literature – has the poorest archaeological record for bark canoes and skin boats. The reader is introduced to the authors’ method, in which data are presented in detail and analyzed at length. There are lengthy descriptions of the ethnohistorical data and the archaeological evidence. For example, prehistoric Scandinavian rock art depictions of boats have been addressed by several authors, and no agreement has yet been reached within the archaeology community as to whether these petroglyphs represent logboats, skin boats, bark canoes, or even watercraft at all. Luukkanen and Fitzhugh review the arguments in detail and at length and bring new data and interpretations to the debate, but are cautious of reaching firm conclusions. This may be disappointing for those looking for straightforward answers, but it is intellectually honest to an extent not always seen in maritime archaeology – much less in books written for non-specialist, “enthusiast” audiences.

Most chapters follow a regular organization: the geographic sub-region is introduced and the deep history of its cultures described. This is highly useful to those readers who are unfamiliar with the numerous cultures. The general archaeology for the region’s cultural history is presented, followed by separate sections on each of individual cultures to be discussed. Within each section, the archaeological evidence for boat usage – much of which is often indirect – is presented first, followed by historical and ethnohistorical data. As archaeological evidence is generally scanty, it is not until the latter stages that we typically get images of boats, details of construction, and descriptions of usage. The ethnohistorical data varies a great deal in quality, from mere mentions by early explorers or merchants of the existence of certain boat types among the various nations, to the careful (but unfortunately rare) descriptions of boat structure and construction by trained observers. Likewise, the accompanying figures vary from the highly romanticized and technically inaccurate renderings one sees in travelogues and maps from the 16th and 17th centures, to careful, precise boat surveys that show the boats’ lines and construction details, and photographs of full-size boats in use in the early 20th century and models in museum collections.

The final chapter, called an Epilogue, by Arctic boat scholar Evguenia (Jenya) Anichtchenko, addresses the relationship between the Eurasian and North American boat traditions. This presents the data and theories for diffusion between the two regions, and notes the surprisingly thin evidence for much direct influence across the narrow Bering Strait.

Overall, The Bark Canoes and Skin Boats of Northern Eurasia provides a comprehensive, fine-grained look at its subject as ethnology, concentrating on the evidence from archaeology and ethnohistory. Those expecting a Eurasian equivalent to The Bark Canoes and Skin Boats of North America may be disappointed. The older book’s strengths are in its descriptions of construction methods and structural details, and especially, in the quality of the boat plans. These were possible because Adney and Chapelle were writing about boat traditions which, although on their last legs, were still extant. Construction by individuals brought up in the indigenous traditions could still be observed and documented, and the boats themselves could still be surveyed in detail. The result was a book that has often served as a construction manual – complete with designs – for countless individuals to build their own replicas.

This was not possible for the boats of Eurasia. Most of the boats discussed disappeared generations or centuries ago – before there was a chance for much ethnographic recording. This means that construction methods are generally described in far less detail – if at all – and boat plans are few. Unfortunately for the enthusiast, those that are present are generally reproduced too small to be of practical use, and this criticism can be applied to the art program of the book in general. With few exceptions, figures are reproduced to the width of one column on the two-column pages, making legibility poor for drawings and photographs alike. Drawings produced especially for the book, mostly for the purpose of typological description or clarification, are sketchy and not of professional quality, making it difficult to understand differences in boat types. Maps, on the other hand, are excellent and are reproduced at full page width, for good legibility. All illustrations are in black and white only, which is not a liablity, since only a very few recent photos of boat models in museum collections would have been created in color.

The amount of detail and the length of some discussions can be heavy going, but they provide excellent perspectives on what is known, what can be surmised, and what is debatable. By highlighting open questions, the authors have set out challenges, or even roadmaps, to other researchers who, I expect, will respond with future research papers and possibly some PhD theses.

The Bark Canoes and Skin Boats of Northern Eurasia is a major contribution to ethnological boat studies. Particularly for those familiar mainly with the boats of North America and western Europe, it is a broad and comprehensive introduction to the archaeology and history of small craft of a region rarely discussed in the English-language literature. It will take its place as an essential reference, next to The Bark Canoes and Skin Boats of North America, not as a sequel, but in its own right.